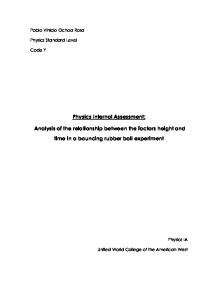 The following student lab report has the purpose of answering the question: “How does altering the height when releasing a bouncing rubber ball affect the time until its complete rest in the vertical sense or y-axis?” It is assumed that as the height increases when releasing the ball it is going to take more time to stop bouncing. As a physics student, I formulated a hypothesis strictly for this experiment which states that: “Height and time are proportional to each other.” Therefore,

This lab activity is intended to prove that hypothesis by experimenting with different tools and materials, measuring data, showing the results, analyzing the data with graphs giving the uncertainties of the measurements, and finally giving a conclusion and evaluation of the hypothesis. These steps are done in order to answer the previously presented question with a scientific point of view.

Apparatus and method of experimentation

The uncertainty of the dependant variable, which is the time t, is ±0.35 s. This has been measured by subtracting the smallest value to the greatest value of time in every measurement of the height, and then the result of that was divided by 2. It can be better explained with this equation:

Therefore, ±3.5 is going to be the uncertainty of time. All values of time have been rounded to 0.10cm.

The uncertainty of the independent variable, which is the height h, is ±0.1cm. This has been settled without any formal guidelines; the factor that just the human eye is used for this experiment and no other more accurate mechanism, gives an uncertainty because the human being is not perfect when measuring something. In this

Originally, the experiment was meant to measure the time until the ball reached complete rest (in both x and y axes) so that it could be easy to stop the chronometer and be more accurate. The problem was that the ball would roll on the floor, and as the floor is an even texture, the ball would stop completely taking a lot of time doing it, and sometimes the time it would take to stop in some cases would be very different to other cases because the ball rolls in different directions every time. Changing the experiment of measuring the time until the ball achieved complete rest to measuring time till the ball achieved complete rest in the vertical sense or the y-axis was the solution to overcome this problem. It created a minor problem though. The problem is that the eye can’t really see when the ball stops bouncing completely because there are some bounces in the y-axis that cannot be seen by the human eye because they are really minor, making the stopping of the chronometer count a little subjective and decreasing the accuracy of the experiment.