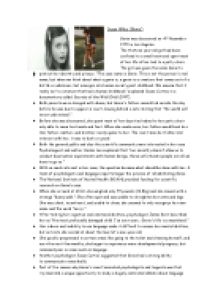 ﻿Susan Wiley (?Genie?) 1. Genie was discovered on 4th November 1970 in Los Angeles. 2. The thirteen year old girl had been confined to a small room and spent most of her life often tied to a potty chair. 3. The girl was given the name Genie to protect her identity and privacy. "The case name is Genie. This is not the person's real name, but when we think about what a genie is, a genie is a creature that comes out of a bottle or whatever, but emerges into human society past childhood. We assume that it really isn't a creature that had a human childhood,? explained Susan Curtiss in a documentary called Secrets of the Wild Child (1997). 4. Both parents were charged with abuse, but Genie's father committed suicide the day before he was due to appear in court, leaving behind a note stating that "the world will never understand." 5. Before she was discovered, she spent most of her days tied naked to her potty chair only able to move her hands and feet. When she made noise, her father would beat her. ...read more.

After this the organisation of the brain becomes set and no longer able to learn and utilise language in a fully functional manner. 17. Genie's case presented researchers with a unique opportunity. If given an enriched learning environment, could she overcome her deprived childhood and learn language even though she had missed the critical period? If she could, it would suggest that the critical period hypothesis of language development was wrong. If she could not, it would indicate that Lenneberg's theory was correct. 18. Despite scoring at the level of a one-year-old upon her initial assessment, Genie quickly began adding new words to her vocabulary. She started by learning single words and eventually began putting two words together much the way young children do. Curtiss began to feel that Genie would be fully capable of acquiring language. 19. After a year of treatment, she even started putting three words together occasionally. In children going through normal language development, this stage is followed by what is known as a language explosion. Children rapidly acquire new words and begin putting them together in novel ways. ...read more.

Did the research interfere with the girl's therapeutic treatment? 28. Genie?s situation continued to worsen. After spending a significant amount of time in foster homes, she returned to Children?s Hospital. Unfortunately, the progress that had occurred during her first stay had been severely compromised by the subsequent treatment she received in foster care. Genie was afraid to open her mouth and had regressed back into silence. 29. In the documentary Secrets of the Wild Child, Harlan Lee stated "Look, there's an ethical dilemma in this kind of research. If you want to do rigorous science, then Genie's interests are going to come second some of the time. If you only care about helping Genie, then you wouldn't do a lot of the scientific research. So, what are you going to do? To make matters worse, the two roles, scientist and therapist, were combined in one person, in her case. So, I think future generations are going to study Genie's case ? not only for what it can teach us about human development, but also for what it can teach us about the rewards and the risks of conducting 'the forbidden experiment.'" Sources: 1. http://www.youtube.com/watch?v=N2Blh9KydjA 2. http://www.youtube.com/watch?v=jcIyXQ20Z1o&feature=youtu.be (Link to Secrets of the Wild Child documentary) 3. http://psychology.wikia.com/wiki/Genie_(feral_child) ...read more.