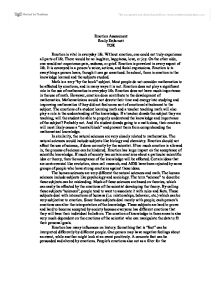 Emotion Assessment Emily DeJarnett TOK Emotion is vital in everyday life. Without emotion, one could not truly experience all parts of life. There would be no laughter, happiness, love, or joy. On the other side, one would not experience pain, sadness, or grief. Emotion is prevalent in every aspect of life. It is conveyed in a person's voice, actions, and facial expressions. Emotion is in everything a person hears, though it can go unnoticed. In school, there is emotion in the knowledge learned and the subjects studied. Math is a very "by the book" subject. Most people do not consider mathematics to be affected by emotions, and in many ways it is not. Emotion does not play a significant role in the use of mathematics in everyday life. Emotion does not have much importance in the use of math. However, emotion does contribute to the development of mathematics. Mathematicians would not devote their time and energy into studying and improving mathematics if they did not feel some sort of emotional attachment to the subject. ...read more.

These subjects are hard to prove and hard to become accepted by society because everyone has different emotions that they will base their individual beliefs on. The creation of knowledge in these areas is also very much dependent on the emotions of the scientist who can manipulate the data to fit their personal goals. Emotion has many influences on history. Something that is "fact" can be interpreted differently by different people. One person may have negative feelings about an event, while another might look at an event positively. A concrete fact can be persuaded and altered by emotions. People's emotions also act as a filter for the information they choose to accept as a fact. For example, when teaching the Revolutionary War to students in America, it is taught as the "fight for independence" against the British who treated us unfairly. American children learn of "courageous heroes" and "brave soldiers" who won "justice for all". This section takes up several chapters in most textbooks. However, students in Great Britain learn about this same war where "colonists became unsettled and rebelled (treason), which the King settled by relinquishing control of the colonies." ...read more.

In religion, emotions go hand in hand with faith. A "good" pastor will be able to invoke emotions in his/her congregation. Ethics are largely based on morals. A person's morals are tied to their emotions. A moral that a person feels strongly about will most likely cause them to have very strong emotions about what they believe in. However, sometimes emotions can interfere with the creation of objective knowledge that may be relevant to large groups of people with very different morals. A good ethical leader must distinguish between their own personal and emotional ties and what is proper and fair to all people. Emotions can be found in all things; even some where it might be surprising. It would appear that life would be very dull with no emotions. But would there even be any life if emotions could not exist? This is a question that there will probably never be an answer to. However, it is important to express emotions and not take them for granted. They are powerful and can do miraculous things; but they can also take the world to a very dark place knocked out of balance. ...read more.