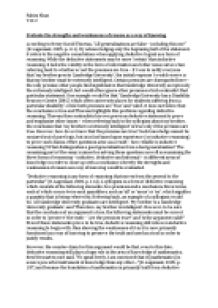 ﻿Fahim Khan Y12.2 Evaluate the strengths and weaknesses of reason as a way of knowing According to Henry David Thoreau, ?All generalizations are false ? including this one? (R. Lagemaat, 2005, p. 111). By acknowledging only the beginning half of the statement, it refers to the negative connotations when applying deductive logical as a form of reasoning. While the deductive statements may be more ?certain? than inductive reasoning, it lacks the validity in the form of information and other issues arise when referring back to whether or not the premises are true ? if I was to notify everyone that ?my brother goes to Cambridge University?, the initial response I would receive is that my brother must be extremely intelligent. Certain premises are disregarded here ? the only premise other people find significant is that Cambridge University accepts only the extremely intelligent, but would often ignore other premises which contradict that particular statement. One example would be that ?Cambridge University has a Disability Resource Centre (DRC) which offers university places for students suffering from a particular disability?; while both premises are ?true? and ?valid?, it does not follow that the conclusion is true and Thoreau highlights this problem regarding deductive reasoning. ...read more.

To add to the difficulty, another two ?star? numbers must be chosen with a range from one-to-eleven. Through inductive reasoning where we move from the particular to the general, we are able to find the probability of winning the Euro-millions when buying a single ticket which is one-in-three hundred and twelve million, five hundred thousand, one hundred and twenty one. As in a normal ?experiment? in mathematics, this is to be repeated again before a conclusion or theorem is made. In Hong Kong?s Mark Six lottery, six numbers ranging from one-to-fourty nine has to be chosen with an additional bonus number ranging from one-to-fourty nine as well. Therefore, the probability of winning the Hong Kong Mark Six is one-to-one-point-three eight four one two eight seven two five to the power of ten, and through ?experience? and inductive reasoning, the general formula could be deduced. As a conclusion, the probability of winning is shown through the equation: ?P = R1N1 + R2N2?, where ?R1? is the first set range of numbers, ?R2? is the second set range of numbers, ?N1? is the number of answers required for the first set of numbers, ?N2? is the number of answers required for the second set of numbers and ?P? is the probability of winning and only now could we consider deductive reasoning significant as a generalised statement is made which is valid. ...read more.

For example, if you are not dead, then the assumption would have to be that you?re alive. Although this proved to be useful in history whereby their survival was mainly based on this sort of reasoning, the modern world proves to be more problematic with various factors included in the problem thus reducing the reliability when using ?False dilemma? to reason an answer. When evaluating the strengths and weaknesses of reason as a way of knowing, it seems that the strengths outweigh that of the weaknesses. Even though there are doubts concerning the reliability of both induction and deduction, it is difficult to see how we could do without these two ways of reasoning in practice. Another significant point is seeing how well deductive and inductive reasoning complement one another ? although there are other ways of knowing through language, emotion and perception, reason is still considered the most significant way of knowing as it takes into account of the environment and other factors as well which may affect the ?truth?. Finally, even though we?ve examined the three forms of reasoning, the overall effect it has on a person?s way of knowing is still unknown due to the other three factors ? to find the ?truth?, we must then examine all the ways of knowing to fully evaluate the effect of reason as a way of knowing. ...read more.