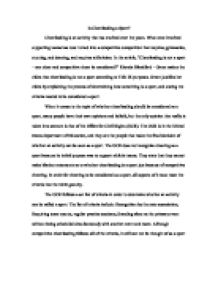 Is cheerleading a sport?

Is Cheerleading a Sport? Cheerleading is an activity that has evolved over the years. What once involved supporting teams has now turned into a competitive competition that requires gymnastics, stunting, and dancing, and requires athleticism. In the article, "Cheerleading is not a sport - can cheer and competitive cheer be considered?" Rhonda Blandford - Green makes the claim that cheerleading is not a sport according to Title IX purposes. Green justifies her claim by explaining the process of determining how something is a sport, and stating the criteria needed to be considered a sport. When it comes to the topic of whether cheerleading should be considered as a sport, many people have their own opinions and beliefs, but the only opinion that really is taken into account is that of the Office for Civil Rights (OCR). ...read more.

They state that they cannot make blanket statements as to whether cheerleading is a sport just because of competitive cheering. In order for cheering to be considered as a sport, all aspects of it must meet the criteria that the OCR goes by. The OCR follows a set list of criteria in order to determine whether an activity can be called a sport. The list of criteria include: Recognition by the state association; Requiring team tryouts, regular practice sessions; Standing alone as the primary event without being scheduled simultaneously with another event and more. Although competitive cheerleading follows all of the criteria, it still can not be thought of as a sport because not all aspects of follow the criteria. ...read more.