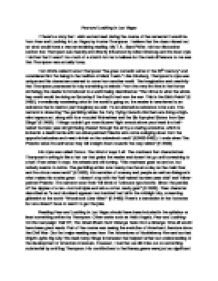 Fear and Loathing in Las Vegas If there's a story that I wish we had read during the course of the semester it would be from Fear and Loathing in Las Vegas by Hunter Thompson. I believe that the class missed out on what would have a very entertaining reading. My T.A., Sara Phifer, told our discussion section that Thompson was heavily and directly influenced by Allen Ginsburg and the beat style. I told her that it wasn't too much of a stretch for me to believe but the main difference to me was that Thompson was actually funny. Tom Wolfe called Hunter Thompson "the great comedic writer of the 20th Century" and considered him "as being in the tradition of Mark Twain." ...read more.

If things couldn't get more bizarre "right smack above your head is a half-naked fourteen year-old girl being chased through the air by a snaring wolverine, which is locked in a death battle with two silver-painted Polacks who come swinging down from the opposite balconies and meet mid-air on the wolverine's neck" (E2492-2493). It ends when "the Polacks seize the animal as they fall straight down towards the crap tables" (E 2493). His style was called Gonzo. That kind of says it all. The craziness that characterizes Thompson's writing is like a fast car that grabs the reader and doesn't let go until screeching to a halt. Even when it stops, the wheels are still turning. "This madness goes on and on, but nobody seems to notice. ...read more.

Part of the course was seeing the evolution of American Literature since the Civil War. Our first major reading was from The Adventures of Huckleberry Finn and our last Bright Lights Big City. We read many things in between that helped further our understanding of the development of American Literature. However, I feel that we did miss out on something substantial by omitting Thompson. His contributions to the literary genre were just as significant as anything written by any of the writers we scrutinized over the course of the semester. Whether it was Twain, Wharton, Chopin, Hemingway, Faulkner, Ellison or Carver, Thompson would easily measure up to anything they had written. While McInerney's Bright Lights Big City has provided some comic relief I don't think we had enough in this course. Thompson could have easily filled that void. ...read more.