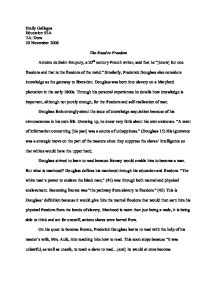 Frederick Douglass Narrative of the Life of an American Slave demonstrates how mental freedom is not enough for the freedom and self-realization of man and it also raised questions about public education in a democratic society.

Emily Gallegos Education 92A TA: Dora 20 November 2006 The Road to Freedom Antoine de Saint-Exupury, a 20th century French writer, said that he "[knew] but one freedom and that is the freedom of the mind." Similarly, Frederick Douglass also considers knowledge as the gateway to liberation. Douglass was born into slavery on a Maryland plantation in the early 1800s. Through his personal experiences he details how knowledge is important, although not purely enough, for the freedom and self-realization of man. Douglass feels strongly about the issue of knowledge acquisition because of his circumstances in his own life. Growing up, he knew very little about his own existence. "A want of information concerning [his past] was a source of unhappiness." (Douglass 15) His ignorance was a strategic move on the part of the masters since they suppress the slaves' intelligence so that whites would have the upper hand. Douglass strived to learn to read because literacy would enable him to become a man. ...read more.

"Learning to read had been a curse rather than a blessing." (48) Douglass began to feel isolated since he learned the truth about the unfixable conditions of slavery that he was formerly ignorant to. He now resented the ignorance of other slaves because they were not haunted by thoughts of slavery like Douglass was. He was also wary of whites because they posed a threat to his independence since they could take advantage of him like they had before with other slaves. However, he had successfully achieved mental emancipation and was now able to speak, read, and write the same language as slave owners, allowing him to formulate his own ideas and opinions that helped him to engage in debates. (48) This, however, was only halfway to attaining true freedom. He had to then utilize his newly gained knowledge to work for physical freedom as well. Literacy itself is not enough to become free. While he is living on the farm of Thomas Auld, a man "destitute of every element of character commanding respect," (57) ...read more.

This is not fair in a a democratic society since everyone should be afforded the same opportunities. Also, it raises the question of how to educate in schools. Since becoming literate is not the only step towards one's independence, a student's physical freedom has to also be considered. This is the same concept that Maria Montessori described. "No one can be free unless he is independent" (Montessori 140) and "this is part of education." (140) Also, Montessori wrote that education "shall help him to diminish...the social bonds, which limit his activity." Frederick Douglass is a great example of defeating social conventions like slavery to earn his liberation. The first step towards freedom and independce was knowledge and then being physically free. Being both physically and mentally independent gave Douglass control over his soul and gave him the courage to escape to New York. Douglass' Narrative of the Life of an American Slave demonstrates how mental freedom is not enough for the freedom and self-realization of man and it also raised questions about public education in a democratic society. ...read more.