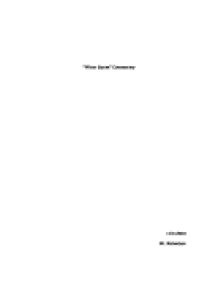 In the poem Winter Syntax, by Billy Collins, the structure is organized into six stanzas. Each of them has a different view but sequentially describes the journey of a traveler

"Winter Syntax" Commentary 11/11/2010 Mr. Richardson The title of this poem tells that the story happens in winter when it is cold and desolate. Through the setting, the structure and the use of imagery, the poet suggests that writing is similar to travelling, after struggling, as if the traveler smiles at the end of the journey, the writer also complete the idea. In the poem Winter Syntax, by Billy Collins, the structure is organized into six stanzas. Each of them has a different view but sequentially describes the journey of a traveler which represents through the similar tough journey, how the writer completes the idea. "A sentence starts out like a lone traveler, heading into a blizzard at midnight."(Line 1-2) The writer uses "lone traveler" as himself, and when he starts the writing, he is like that traveler going into the blizzard; he had a hard time. ...read more.

"Blaze" is a potent verb here, because it can show the brightly burning or rapidly moves. It depicts intensely that there are something flashed in the writer's mind, but maybe it is too quick to catch, so that he still keeps silence. As it's described, this shows that the writer takes a step forward to its end rather than walking along in the blizzard. Then after this stanza, the writer comes up with more examples and ideas, like "the full moon". "The full moon" always represents a sense of completion and perfecting, but when "a cloud crosses it", the round is broken and it becomes meaningless when the moon is under the cloud. So that the writer is being sarcastic when the author pictures it "as eloquent as a bicycle leaning outside a drug store" and "a dog who sleeps all afternoon in a corner of the couch". ...read more.

Snows are like papers, they characterize that the writer is persistent even though there are "snow" falling around him; he is still working hard on his "journey". Eventually in the last stanza, the traveler finishes his journey as the writer completes his thought. "Shivering", "sparkling frost" and "icicles" all show that the traveler is frozen by the snow and coldness. It is like a man who just comes from the North Pole, there are ice fragments on his coat and he is shaking. But a "smile will appear...and the man will express a complete thought." When one can go through a tough journey like this, one will have the feeling of joy and satisfy. Overall the happy ending completes the thought and finishes the journey. To conclude, the poem suggests that after hard working, there will be a wonderful result as the traveler has a hard time staying in the snow and the writer blanks on the writing but they still achieve the goal. ?? ?? ?? ?? ...read more.