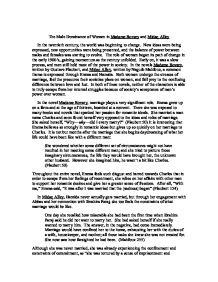 The Male Dominance of Women in Madame Bovary and Midaq Alley In the twentieth century, the world was beginning to change. New ideas were being expressed, new opportunities were being presented, and the balance of power between males and females was starting to evolve. The role of women began its path of change in the early 1900's, gaining momentum as the century unfolded. Early on, it was a slow process, and men still held most of the power in society. In the novels Madame Bovary, written by Gustave Flaubert, and Midaq Alley, written by Naguib Mahfouz, a common theme is expressed through Emma and Hamida. Both women undergo the stresses of marriage, feel the pressures their societies place on women, and fall prey to the confusing difference between love and l**t. In both of these novels, neither of the characters is able to truly escape from her internal struggles because of society's acceptance of men's power over women. In the novel Madame Bovary, marriage plays a very significant role. Emma grew up on a farm and at the age of thirteen, boarded at a convent. There she was exposed to many books and novels that sparked her passion for romantic ideals. ...read more.

The relationship that she thought would end well actually ended terribly wrong. Ibrahim Faraj brought her despair and sadness and Abbas, whom she loved, died trying to protect her. From both novels, the reader can see the affects male dominance can have in a relationship. When the male has more power, the woman's sense of freedom diminishes, making the relationship stressful and demeaning. When Emma is pregnant, she wishes for a boy: He would be strong and dark... this idea of having a male child was like a promise of compensation for all her past frustrations. A man is free, at least - free to range the passions and the world, to surmount obstacles, to taste the rarest pleasures. Whereas a woman is continually thwarted. Inert, complaint, she has to struggle against her physical weakness and legal subjection. (Flaubert 101) What Emma says here sums up exactly how she feels: men are free and women are not. She wishes only to have a boy so as to not subject a girl to the same struggles she experiences - that of feeling "continually thwarted." The irony of this situation is that she does give birth to a girl who eventually loses all of her freedoms. ...read more.

From this quote, the reader can conclude that love was no longer the pervasive feeling here. Describing Emma as a possession makes her seem more like an object than a person capable of expressing and receiving feelings. The same happens in Midaq Alley with Ibrahim and Hamida: [Ibrahim] himself had never known love... whenever a new girl fell into his net, he played the part of the ardent lover-until she succumbed; after that he continued to court her for a short time. From then on he had made sure of his influence by making her dependent upon him emotionally and financially...when his mission was accomplished he dropped his role of lover for that of the flesh merchant. (Flaubert 256). As depicted in this quote, the reader is shown that men of this time period often confused l**t for love. Women in the 20th century went through difficult times trying to evolve the roles they had been given. Both Emma and Hamida experienced many difficulties. From both books, the reader can see evidence to support the stresses marriage entails, the hardships of the woman's role, and the twisted minds of some men when it comes to love vs. l**t. Neither Emma nor Hamida was able to physically escape from these torments, but their resolve to change their circumstances sowed the seeds of change for a new way to a life in the future. ...read more.