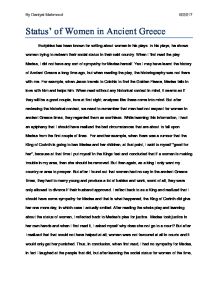 Medea Reflection. When I first read the play Medea, I did not have any sort of sympathy for Medea herself.

Status’ of Women in Ancient Greece

Euripides has been known for writing about women in his plays. In his plays, he shows women trying to redeem their social status in their said country. When I first read the play Medea, I did not have any sort of sympathy for Medea herself. Yes I may have learnt the history of Ancient Greece a long time ago, but when reading the play, the historiography was not there with me. For example, when Jason travels to Colchis to find the Golden Fleece, Medea falls in love with him and helps him. When read without any historical context in mind, it seems as if they will be a good couple, love at first sight; analyses like these come into mind. But after reviewing the historical context, we need to remember that men had not respect for women in ancient Greece times, they regarded them as worthless. While learning this information, I had an epiphany that I should have realized the bad circumstances that are about to fall upon Medea from the first couple of lines.  For another example, when there was a rumour that the King of Corinth is going to ban Medea and her children, at that point, I said to myself “good for her”, because at that time I put myself in the Kings feet and concluded that if a woman is making trouble in my area, then she should be removed. But then again, as a king I only want my country or area to prosper. But after I found out that women had no say in the ancient Greece times, they had to marry young and produce a lot of babies and work, worst of all, they were only allowed to divorce if their husband approved. I reflect back to as a King and realized that I should have some sympathy for Medea and that is what happened, the King of Corinth did give her one more day, in which case I actually smiled. After reading the whole play and learning about the status of women, I reflected back to Medea’s plea for justice.  Medea took justice in her own hands and when I first read it, I asked myself why does she not go to a court? But after I realized that that would not have helped at all, women were not favoured at all in courts and it would only get her punished. Thus, in conclusion, when first read, I had no sympathy for Medea, in fact I laughed at the people that did, but after learning the social status for women of the time, I came back to feeling sorry for Medea. I guess when they say you should learn from your mistakes, there is no lie in that.