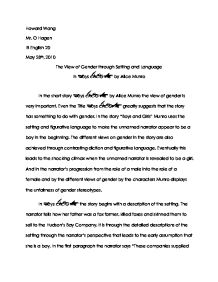 Howard w**g Mr. O Hagen IB English 20 May 28th, 2010 The View of Gender through Setting and Language In "Boys and Girls" by Alice Munro In the short story "Boys and Girls" by Alice Munro the view of gender is very important. Even the Title "Boys and Girls" greatly suggests that the story has something to do with gender. In the story "Boys and Girls" Munro uses the setting and figurative language to make the unnamed narrator appear to be a boy in the beginning. The different views on gender in the story are also achieved through contrasting diction and figurative language. Eventually this leads to the shocking climax when the unnamed narrator is revealed to be a girl. And in the narrator's progression from the role of a male into the role of a female and by the different views of gender by the characters Munro displays the unfairness of gender stereotypes. In "Boys and Girls" the story begins with a description of the setting. The narrator tells how her father was a fox farmer, killed foxes and skinned them to sell to the Hudson's Bay Company. It is through the detailed descriptions of the setting through the narrator's perspective that leads to the early assumption that she is a boy. In the first paragraph the narrator says "These companies supplied us with heroic calendars to hang, against a background of cold blue sky and black pine forests and treacherous northern rivers, plumed adventurers planted the flags of England or of France; magnificent savages bent their backs to the portage"(97). ...read more.

She remarks that "It was an odd thing to see my mother down at the barn. She did not often come out of the house unless it was to do something - Hang out the wash or dig potatoes in the garden, she looked out of place, with her bare lumpy legs, not touched by the sun, her apron still on and damp across the stomach from the supper dishes" (101). There is huge contrast between the role of the woman and the role of the man in the household. The woman in the household which is the mother rarely comes outside and always works inside the house while the man in the household which is the father is always working outside. Because of this huge contrast between the different work of the man and the woman and the narrator working with her father instead of the mother it once again solidifies the idea that the narrator is a boy in the readers mind. In the setting working inside the house seems to be a confinement which the narrator tries to escape while working outside is seen as very important and the narrator at first believes that she needs to be outside working with her father and not trapped inside the house. The Narrator says that "It seemed to me that work in the house was endless, dreary and peculiarly depressing; work done out of doors, and in my father's service; was ritualistically important" (102). ...read more.

The daydreams which she had near the beginning of the story and the daydreams which she has near the end represent the male and female gender, the male gender being strong and courageous whiles the female gender being beautiful and weak. The narrator slowly becomes a "girl" which she didn't want to become before. In the first half of the story where the author has the illusion that the narrator is a boy it is shown that the narrator could help out and do work that men could do even thought she is a girl but because of the constant expectations from everyone for her to act weak and feminine she fell into that gender stereotype and became her definition of a "girl". To further demonstrate the narrator becoming weak, soft and stereotypically feminine is at the end of the story when laird says matter of factly "she's crying" (111) and the father replies with "Never mind, she's only a girl"(111). The narrator describes the fathers tone as "[speaking] with resignation, even good humour, the words which dismissed [her] for good" (111). In "Boys and Girls" by Alice Munro the unfairness of gender stereotypes is shown through different perspectives on gender combined with setting and language. The setting and language in the story is used to show that the narrator is capable of doing a man's work but she is confined to the stereotype of a girl because of the expectations from everyone that she acts that way because she is a girl, which highlights the unfairness of gender stereotypes. ...read more.