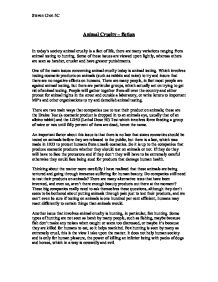 Animal Cruelty - fiction In today's society animal cruelty is a fact of life, there are many variations ranging from animal testing to hunting. Some of these issues are viewed upon lightly, whereas others are seen as harsher, crueler and have greater punishments. One of the main issues concerning animal cruelty today is animal testing. Which involves testing cosmetic products on animals (such as rabbits and mice) to try and insure that there are no negative effects on humans. There are many people, in fact most people are against animal testing, but there are particular groups, which actually act on trying to get rid of animal testing. People will gather together from all over the country and either protest for animal rights in the street and outside a laboratory, or write letters to important MP's and other organizations to try and demolish animal testing. There are two main ways that companies use to test their product on animals; these are the Draize Test (a cosmetic product is dropped in to an animals eye, usually that of an albino rabbit) ...read more.

Fox hunting is seen by many as extremely cruel, this is the view I take upon the matter. It does not help human society and is only for human pleasure, the power of killing an inferior being with packs of dogs and horses, which in a way is cowardly and evil. Fox Hunting was brought up in The House of Commons last year, people were trying to get it banned, but the people didn't really have much of a say in it in the end, the final decision was to have it legal, but with people needing licenses, so the same people are still hunting down foxes, but they have to pay to do it, which doesn't change the situation at all, foxes are still exhausted and killed inhumanely. It definitely should be banned by all means necessary, it is ridiculous how a supposed civilized race can be cruel enough to hunt down and kill an innocent fox for pleasure. As you would expect there are many organizations that are against fox hunting and try their utmost hardest to ban all fox hunting. ...read more.

Anybody can walk into a shop and buy a small pet, and most people can go to a dog breeder or somewhere that is selling a litter and come away with one or more puppies, this isn't right, obviously some places do check out the owners house, but even with things like that okay, doesn't mean that the person would get fed up with his or her pet and start kicking and hitting it with things. Penalties need to be harsher for people who abuse animals, animals have the right to a peaceful life, as do humans, we need to respect their needs and treat them with care. Fox hunting should be banned, so should animal testing, there is no need for these animals to be abused as they are. Cosmetics are fine as they are, there isn't even a law saying they need to be tested upon, and fox hunting is d**n right insane, why on Earth do they need to be hunted down and killed, I realize it is a tradition, but it is one that we can well do without. Steven Cron 5C ...read more.