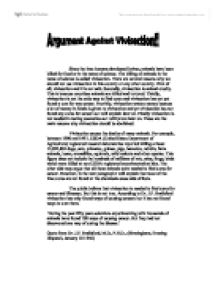 Since the time humans developed knives, animals have been killed for food or in the name of science. The killing of animals in the name of science is called vivisection. There are several reasons why we should not use vivisection in this country or any other country. First of all, vivisection and it is not safe. Secondly, vivisection is animal cruelty. This is because countless animals are killed and tortured. Thirdly, vivisection is not the only way to find cures and vivisection has not yet found a cure for any cancer. Fourthly, vivisection wastes money because a lot of money in funds is given to vivisection and yet vivisection has not found any cures for cancer as I will explain later on. Finally vivisection is not needed in testing cosmetics as I will prove later on. These are the main reasons why vivisection should be abolished. Vivisection causes the deaths of many animals. For example, between 1990 and 1997, USDA (United States Department of Agriculture) registered research laboratories reported killing at least 12,892,885 dogs, cats, primates, guinea, pigs, hamsters, rabbits, farm animals, bears, armadillos, squirrels, wild rodents and other species. This figure does not include the hundreds of millions of rats, mice, frogs, birds which were killed at non USDA registered experimentation labs. ...read more.

So when discoveries from animal experimentations are applied to humans, there can be many side effects on the human body. This is another reason why vivisection should be abolished. Vivisection is not reliable. It is not safe. So far, I have explained why vivisection is not needed to make advancements in medical research. But what about the use of vivisection in cosmetics? Every year thousands of new cosmetics, personal care and household products are introduced into the marketplace. Almost all of them have been animal tested at some stage of their development. These products have gone through a long and complex testing process which leaves millions of animals mutilated, burned, poisoned and gassed. Below are just two of the tests that animals have to go through: * The LD-50 test consists of a group of animals being forced to ingest or inhale varying amounts of a substance. In mot cases the substance causes pain in the animals. Furthermore, the test is only complete when half of the test subjects die. As for the other half, they are killed and then analysed to determine which organs were affected by the substance. * Another use of vivisection in testing cosmetics is The Draize test for the eye and skin irritancy. ...read more.

* To measure the recovery from injuries, dogs were strapped down while vivisectors destroyed the use of the dogs' knees by cutting apart skin to leave flaps. At the end of the study all the dogs are killed. Finally, even though so many animals are suffering through vivisection, nothing is being done about it except more money is being given to continue vivisection in the hope of finding cures. For example, the U.S. vivisection industries spend over $18 billion (Figure from www.animalconcern.com) on animal experimentation. Therefore, you must understand that a lot of money is being spent on a method that is not reliable to find human cures for illnesses. All this money could have been spent to help homeless people. It could have been used to improve schools, hospitals, libraries, yet the money is being used to kill innocent animals that die for nothing. After all that I have said, you can see why I am against vivisection. Firstly, vivisection is not needed because it is not reliable. Secondly, animals are tortured cruelly in the experimentations. Thirdly, vivisectors deceive the public into thinking that vivisection is the only way to find cures for illnesses in the human body. Fourthly, vivisection is not needed for testing the safety of cosmetics. Finally vivisection wastes money. By Awais b**t 10L6 ...read more.