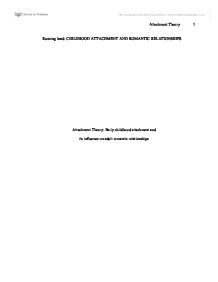 Running head: CHILDHOOD ATTACHMENT AND ROMANTIC RELATIONSHIPS Attachment Theory: Early childhood attachment and its influence on adult romantic relationships Abstract Bowlby (1988) proposed attachment theory as a model for exploring human tendencies for forming early infant / caregiver emotional bonds. Studies by Harlow (1965) highlighted the long term dysfunctional effects on infant monkeys when primary care givers were absent. This raised the likelihood of an evolutionary basis for forming attachments in species including humans. Lorenz also recognized the tendencies of animals to formulate early bonds of attachment during critical developmental periods. Bowlby established a theory where the normative goal was one of security attachment. This was later expanded upon by other theorists who recognised the existence of three primary attachment styles. Others found that similar styles are evident in adult individuals. The question is posed whether they are in fact interrelated and dependent or mutually exclusive. This essay argues in support of recent research where longitudinal studies indicate a strong correlation between infant attachment and adult romantic relationship styles. Attachment Theory: Early childhood attachment and its influence on adult romantic relationships According to Bowlby (1988), attachment theory is a suitable model for exploring the human tendency to form close emotional bonds between particular individuals; recognizing that such affinities exist as fundamental elements of our nature. ...read more.

Bowlby's (1969) earlier research suggested that if the infant could locate the care giver they would feel secure and if the infant could not locate the care giver they would experience distress. Bowlby (1969) understood that the attachment behavioural system would contain both normative processes and individual processes. Accordingly, normative processes would refer to the universal operation of attachment and adaptive functions including emotional and social components. Conversely, individual differences would refer to the specific ways in which the attachment system is active in different people and would recognizes that this is somewhat dependent upon past and present attachment experiences (Collins & Feeney, 2004). Bowlby (1969, 1980) established the normative outcome that, should the care giver be successfully detected, the infant in this case would experience security, love and sociability. Extending upon Bowlby's research claims, Ainsworth, Blehar, Waters and Wall (1978) investigated the attachment behavioural system in somewhat more depth. Ainsworth et al. (1978) created a design called the 'strange situation' where she and her colleagues could easily study infant and care giver attachment in a laboratory where the infants and their caregivers were methodically separated and then brought back together. Ainsworth et al. (1978) found that the majority of infants conducted themselves as per Bowlby's normative theory and these infants were categorized as having a secure attachment style. ...read more.

Such studies include Simpson, Collins, Tran & Haydon (2007) who studied the cross generational effects of attachment relationships. Bowlby's fundamental principal of attachment theory gives rise to the longitudinal study devised by Simpson et al. (2007). When four vital stages of development were assessed, Simpson et al. (2007) were able to find a significant connection in the portrayal of emotions between infant attachments and adult romantic relationships. The longitudinal results from Simpson et al. (2007) are noteworthy as they propose how a key attachment style is initiated in infancy and maintained to some extent throughout adulthood, but also interestingly, how it can change as adults enter new and different romantic relationships and developmental stages over the course of time. Simpson et al. conclude that early developmental stages will most likely form the greatest impact on the stages that directly follow them. In conclusion, the research confirms there is a strong correlation between early attachment style and mature adult romantic love. To expect there is a directional effect whereby early attachment directly influences adult romantic attachment tendency is not only plausible, but highly likely as an artefact of continuity. Hence, there is indeed some substance to Bowlby's claim that the effects of infant attachment style will remain with us from "the cradle to the grave" (1979 p.129). To what extent these tendencies are amenable to psychological change, will the subject of further enquiry. ...read more.