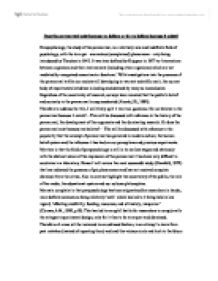 Does the paranormal exist because we believe or do we believe because it exists?

Does the paranormal exist because we believe or do we believe because it exists? Parapsychology, the study of the paranormal, is a relatively new and indefinite field of psychology; with the term psi - anomalous (unexplained) phenomena - only being introduced by Thouless in 1942. It was later defined by Krippner in 1977 as 'interactions between organisms and their environment (including other organisms) which are not mediated by recognized sensorimotor functions.' With investigations into the presence of the paranormal within our society still developing to warrant scientific merit, the current body of experimental evidence is lacking and deemed by many as inconclusive. Regardless of the uncertainty of research, surveys have revealed that the public's belief and curiosity in the paranormal is unprecedented (Alcock,J.E., 1990). Therefore to address the title, I will firstly split it into two questions: Do we believe in the paranormal because it exists? - This will be discussed with reference to the history of the paranormal, the development of the arguments and the dominating research. Or does the paranormal exist because we believe? - This will be discussed with reference to the popularity that the concept of paranormal has garnered in modern culture, the human belief system and the influence it has had on our perceptions and previous experiments. ...read more.

To further emphasize this point Schmeilder also identified that disbelievers scored significantly below chance, and when compared, the difference between the two was so significant that it is now feared that the arguments between parapsychologists and sceptics has now spilled over into the experiments. Many psychology experimenters have been accused of inflicting demand characteristics on their participants, and paranormal experiments are no different. Schmeilder (1958) proposed that the belief orientation of the experimenter or research team conducting the experiment could have a 'psi-inhibitory' or 'psi-conductive' effect on the participant. I.e. if the participant felt that the people coordinating the results were cynical of their answers or their performance, they gained a lesser score; probably from holding back as not to embarrass them or avoiding being made to feel uncomfortable through questioning (Alcock, J.E, 1990). Schmeilder has shown participants to gain more significant scores if the experimenter is for example more enthusiastic about the answers the participant is making, this is not to say that the experimenter inflicts psi ability on them, but that they do tend to express themselves more. There are many other experimental factors that may have constituted fraud, however I want to concentrate on this main influencing factor of 'belief' compromising the existing validity of evidence. ...read more.

(Wolfman 1977) The conflict between many scientists and the parapsychologists will continue if scientists look to the paranormal as 'nonsense' or as a threat, they must work together to find the definite answer: Paranormal is "in principle physically impossible and outside the range of human capabilities as presently conceived by conventional scientists." (Tobacyk, 1995) The public (no matter what the media may speculate) and researchers should not expect a revolutionary finding, it may take some time: 'No single person has been able to demonstrate unique proficiency in psi, and such a person is generally no longer expected to exist' (Teresi.,S. 2000) Researchers must be encouraged to investigate: 'The James Randi Educational Foundation (JREF) has offered one million dollar prize for anyone to submit proof that their claims of having repeatable paranormal ability are true' (Frazier,K. 1998 p258). Adapting a critical thinking, non-biased approach: Society of Psychical Research (1882) founded, established objectives 'to examine without prejudice or prepossession and in a scientific spirit those faculties of man, real or supposed, which appear to be inexplicable on any generally recognized hypothesis' (Frazier, K. 1998 p 256). And to remember: 'An extraordinary degree of evidence is often demanded in support of extraordinary claims.' (Irwin, H.J., 2004). As they say there's no smoke without fire.................... ...read more.