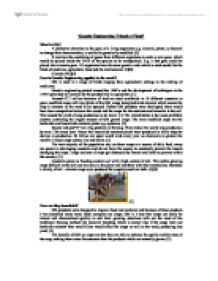 'Genetic Engineering: Friend or Fiend' What is GM? A deliberate alteration to the gene of a living organisms e.g. animals, plants, or bacteria to change their characteristics, is said to be genetically modified. [2] It involves the combining of genes from different organisms to make a new gene, which would be placed inside the DNA of the species to be manipulated. E.g. a fish gene could be placed into a tomato gene. All organisms have the same genetic code which is made useful for the fields of medicine, agriculture, food and the environment. [3][6] (Tomato PIC)[5] How is Genetic Engineering applied to the world? GM is used in a range of fields ranging from agricultural settings to the making of medicines. Genetic engineering started around the 1960's and the development of techniques in the 1970's provided an increase for the productivity in agriculture. [1] Around 67.7 million hectares of land are used worldwide in 18 different countries to grow modified crops with two thirds of the GM crops being herbicide tolerant which means the crop is immune to the weed killer sprayed. ...read more.

[5] The benefits of GM on crops are that they are able to enhance the quality and the taste of the crop, making them more flavoursome than the products which are naturally grown. [2] They help increase the nutrients within the plant as well as the yield, as fewer chemicals are being used to help it grow. There is also an increase in its stress tolerance against saline soils. [1] GM has helped improve resistance against diseases and viruses, as well as pests and herbicides. They have modified them so that they are resistant to extreme changes in the weather, this means when the climate may become warmer or colder outside the accustomed temperature range of the crop. Crops are not only improved in its growing technique, they have also improved on the products themselves. Fresh fruit and vegetables have been grown so that they can be stored longer on the selves of supermarkets, e.g. tomatoes are normally picked when they are still green so that when they reach the shops they are ripe and ready to sell, but this normally means that they have not received the full nutrients as they have been picked before they have been ripped in there natural environment. ...read more.

[3] Ethical issues have been raised because of GM, it is said to be wrong to be interfering with the way nature works. GM has affected animals who now find it hard to consume food. It is unethical to mix genes from different organisms, this is said to be tampering with nature, or playing God. [2] GM crops were mainly aimed to help feed the worlds growing population but arguments have expressed the point that the world is suffering from malnutrition, not because of the shortage to buy, but because they are unable to afford it. Many of the GM plants are being grown in developing countries but these crops are effectively grown for the markets of rich countries. [3] Conclusion Genetic engineering of food is increasing and is under the control of only a few major companies e.g. Monsanto. They provide an alternative to traditional farming methods. The product will look appealing but within that manipulated product it may or will contain risks. I personally do not find altering genes to crops appealing and would rather stick to products that have been grown naturally as this is much safer. ...read more.