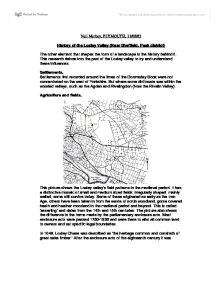 History of the Loxley Valley (Near Sheffield, Peak district).

Neil Morbey, PLYMOUTH, 11/08/82 History of the Loxley Valley (Near Sheffield, Peak district) The other element that shapes the form of a landscape is the history behind it. This research delves into the past of the Loxley valley to try and understand these influences. Settlements. Settlements first recorded around the times of the Doomsday Book were not concentrated on the west of Yorkshire. But where some did locate was within the wooded valleys, such as the Agden and Rivelingdon (Now the Rivelin Valley). Agriculture and fields. This picture shows the Loxley valley's field patterns in the medieval period. It has a distinctive mosaic of small and medium sized fields; irregularly shaped, mainly walled, some still survive today. Some of these originated as early as the Iron Age, others have been taken in from the waste of scrub woodland, gorse covered heath and heather moorland in the medieval period and beyond. This is called 'asserting' and dates from the 14th and 15th centuries. The picture also shows the difference in the forms made by the parliamentary enclosure acts. Most enclosure acts were passed 1750-1830 and were there to allot all common land to owners and set specific legal boundaries. In 1649, Loxley Chase was described as 'the herbage common and consiteth of great oake timber.' ...read more.

This seems to me, ridiculous. If we do not need all the agricultural land, surly that means we are spending too much money on imports. Yet this is hard to deal with, as economic studies show that import bans and subsidies to farmers in England rarely work. Set aside land now accounts for neatly 3000 hectares of farmland in South Yorkshire. Woodland. Most of the surviving ancient woodland on South Yorkshire was managed as coppice woodland since the medieval period until sometime in the nineteenth century. This is a traditional method of woodland management as discussed in The History of Landscape Change Section. All of the woods in the Loxley valley are non-ancient. This means they are secondary and created by re-germination of previously cleared land. They mostly exist on sites that cannot be used for agriculture, such as steep slopes (around the river) and wetlands, as around the reservoir. Since the valley lies on the Pennine fringe its woodland has a signature, derived from the coal measures and grit tone it lies on. But these signatures have been altered with the introduction of new species, such as Hornbeams, Chestnuts and Beeches, not native trees to south Yorkshire. And this, along with the reduction of coppicing and Dutch elm disease has lead to today's wood of Oak, Ash and Alder and many trees of the same age. ...read more.

These could have been used for many things and records are sketchy, but mills were widespread by the 1700's. The common early uses were iron smelting, cutters, corn milling, paper making and bark crushing. These mills require the water's power to be harnessed, so weirs and reservoirs were set up along the river Loxley. These early industries had a big effect on the shape, direction ad look of the river and therefore the landscape. The wears and reservoirs still exist today, but little is left of the mills. Although their mark is still felt through the walks along the river, seeing the great surging wears and beautiful reservoirs, but also the marshes, dams and the returning woodland along the river. Now the industry comprises of water treatment and some timber yards. These have been masked well, by keeping them low in the valley and amongst tree coverage. Now the main impacts on the valleys' character will come from the other land uses, such as agriculture and housing. But with the use of renewable energy issues we never know when we may see that water power being harnessed again. BIB: An Environmental history of Britain, by I.G. Simmons. Pages: 202-209, 218-220, 234-236, 258-270, 291, 297-299, 323-325 The Illustrated history of the countryside, by Oliver Rackham. Chapters 1, 2, 4, 5, 6, 7, 13, 14, 16. Pictures copied from pages 31 and 32. Britain's changing countryside, by Mary C Morris Chapters 2 and 3 ...read more.