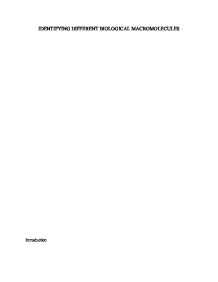 The solutions that resulted in negative control were glucose, glucose-1-phosphate, maltose, honey, sucrose, lactose, glycogen, starch, beer, distilled water and the unknown (215) solution. Discussion Looking at the results from the Buiret test, the only solution that had a positive control was protein because no other solution contained any trace amounts of protein macromolecules except for the obvious protein solution. Looking at the results from the iodine test the obvious solutions that had positive results were 1% glycogen and 1% starch because they contained carbohydrate polysaccharide molecules (Miskovic, 2011). For the Benedict's test the solutions that were positive were glucose, maltose, honey, lactose, beer, and unknown (215). These solutions had positive results because they contained simple sugars within the solutions (Miskovic, 2011). Overall, the results were what I expected except for the 1% sucrose solution involved in the Benedict's test. I predicted that sucrose would have a positive result and contain trace amounts sugar molecules, but instead I ended up with a negative result during the experiment. Referring back to the experiment the unknown solution is 1% starch solution because looking at the iodine test for starch and glycogen the unknown solution had the same type of control and colour as the 1% starch solution. Both solutions had a positive test control and both solutions were bluish-black after the test was complete therefore it can be concluded that the unknown (215) solution is indeed 1% starch solution. ...read more.