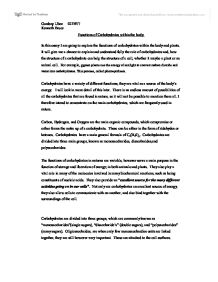 Functions of Carbohydrates within the body. In this essay I am going to explore the functions of carbohydrates within the body and plants. It will give me a chance to explain and understand fully the role of carbohydrates and, how the structure of a carbohydrate can help the structure of a cell; whether it maybe a plant or an animal cell. For example, ggreen plants use the energy of sunlight to convert carbon dioxide and water into carbohydrates. This process, called photosynthesis. Carbohydrates have a variety of different functions; they are vital as a source of the body's energy. I will look in more detail of this later. There is an endless amount of possibilities of all the carbohydrates that are found in nature, so it will not be possible to mention them all. I therefore intend to concentrate on the main carbohydrates, which are frequently used in nature. Carbon, Hydrogen, and Oxygen are the main organic compounds, which compromise or rather forms the make up of a carbohydrate. These can be either in the form of aldehydes or ketones. Carbohydrates have a main general formula of Cx(H20)y. Carbohydrates are divided into three main groups, known as monosaccharides, disaccharides,and polysaccharides. The functions of carbohydrates in natures are variable, however serve a main purpose in the function of storage and liberation of energy; in both animals and plants. They also play a vital role in many of the molecules involved in many biochemical reactions, such as being constituents of nucleic acids. ...read more.

The diagram below illustrates how lactose is formed. In the diagram above it shows a monosaccharide, which I have not mentioned, ?-D-Galactose. This monosaccharide is found occurring in the brain and nerves, and is an isomer of glucose. I have also shown where hydrolysis would occur. To get the disaccharides back into their single sugars (monosaccharides), you need to reverse the condensation reaction. Therefore, you need the addition of water, which is known as hydrolysis. This occurs during digestion, when disaccharides and polysaccharides are broken down into their single monomer units. Polysaccharides are polymers, where the repeating subunits are monosaccharides. They are formed very similarly to disaccharides, where condensation reactions occur to join the units together. A successive glycosidic bond adds each monosaccharide. The number of monosaccharide units added is variable, there could be thousands of monosacchardies joined together; where in this case a macromolecules is formed. They do not necessarily have to be straight chains, they could form branches, which could affect its solubility. The main important polysaccharides are starch, glycogen and cellulose. Which I have already mentioned previously. I have already emphasised that glucose is the main source of energy for cells. It is transported throughout the body through our blood. It is therefore essential that living organisms store it properly and efficiently. If glucose levels were to rise in the cells, it would become too concentrated and which would affect the osmotic properties. It would then intervene with the chemistry and biochemical reactions of the cell. ...read more.

It is also found in fungal of cell walls. Bacterial cells are categorised into two major classes, gram negative and gram positive. The cell wall helps to decided which cell falls into which category. This is achieved by using a gram stain, (iodine complex). The bacterium, which preserve the dye are called 'gram-positive', and the bacteria which do not are named 'gram-negative' bacteria. The gram-positive bacteria contain peptidoglycan within their cell walls; this is known as a polysaccharide-peptide complex. What makes it a gram-positive bacteria is that the peptidoglycan is cross-linked, and multilayered at the surface, 'outside the lipid cell membrane'. The gram-negative bacteria, also contains peptidoglycan, but this is 'single layered and covered by an outer lipid membrane'. This essay has allowed me to explore the functions of carbohydrates in depth. It displays how important carbohydrates are within our body. There was a vast amount of emphasis on 'glucose', which seemed to be the central molecule. It proves how important glucose is, as energy sources in cells and also important building blocks for larger molecules. Carbohydrates is a huge topic to discuss, as there are endless possibilities of molecules which can be formed, mainly in the structure of disaccharides, however I still outlined the main important features of carbohydrates within the body. Carbohydrate not only serves purpose in our bodies, it also serves purpose in our diets. Carbohydrates should be a main constituent of a meal, experts in the field of nutrition feel that complex carbohydrates are a more efficient source than proteins and fats. With fewer toxic by products from their digestion and less metabolic work for the kidneys and liver. ...read more.