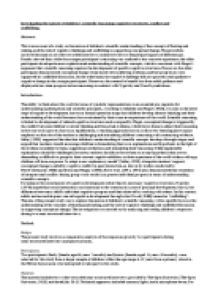 ﻿Investigating the nature of children's scientific reasoning: cognitive structures, conflict and scaffolding. Abstract. This is an account of a study on the nature of children's scientific understanding of the concepts of floating and sinking, and the role of cognitive challenge and scaffolding in supporting conceptual change. The procedure involved the analysis of video-recorded interviews conducted with two female participants of different age. Results showed that, while the younger participant's reasoning was confined to her concrete experience, the older participant developed a more sophisticated understanding of scientific concepts, which is consistent with Piaget's argument that scientific reasoning requires the development of specific cognitive structures. Moreover, the older participant demonstrated conceptual change when faced with conflicting evidence, and her progresses were supported by scaffolded discussion. On the other hand, the cognitive challenge did not spurred a real qualitative cognitive change in the younger participant. Moreover, she seemed to benefit less from adult guidance and displayed a less clear progress in her reasoning, in contrast with Vygotsky and Wood's predictions. Introduction. The ability to think about the world in terms of symbolic representations is an essential pre-requisite for understanding mathematical and scientific principles. According to Inhelder and Piaget (1958), it is only in the latter stage of cognitive development, known as formal operation stage, that children develop abstract thinking and their understanding of the world becomes less constrained by their concrete experience of the world. Scientific reasoning is linked to development of related cognitive structures and, as argued by Piaget, conceptual change is triggered by the conflict between children's current thinking and the actual evidence, which forces them to adjust their reasoning in the course of a process known as equilibration. A teaching approach known as discovery learning places major emphasis on the role of the teacher in challenging and stimulating children's reasoning with contrasting evidence. Selley (1993) supported the idea that children's understanding of scientific concepts develops through stages, and argued that teachers should encourage children in formulating their own explanations and hypothesis in the light of the evidence available to them, suggesting correlations and stimulating their reasoning. ...read more.

Rather than demonstrating a qualitative change in her thinking, she seemed to opt for an alternative explanation that could fit the actual evidence. On the other hand, Jessica's conceptual change is marked by the introduction of two new causal themes, those of Shape and Density. While her grasp of complex concepts is still uncertain (especially that of density), the boat effect and Archimede's principle are both indicated by Shelley as more sophisticated scientific reasoning on why things float or sink. Jessica's responses suggested a better understanding of scientific concepts, which could be explained in terms of both developed cognitive abilities and the effects of the cognitive challenge. Again, this is consistent with Piaget's predictions. Jessica's conceptual change is further strengthened in the latter part of the investigation: unlike Emily, she developed her reasoning by shifting from explanations based on materials to explanations based on shape. For instance, while in stage 6-7 both children argued that candles floated because they were made out of the same material, wax, after the scaffolded discussion Jessica reasoned that candles floated because they were shaped ?like a log? and were ?a bit curvy?. Similarly, while Emily tended to generalise the knowledge that objects in which water couldn't get in would float in an inconsistent way (she argued that the rubber and the elastic band got wet) to fit the evidence with her current hypothesis, Jessica displayed a progress towards a more complex scientific reasoning. While these findings supported the idea that collaborative working with adults is beneficial for cognitive development, Emily's lack of progresses in her scientific reasoning, by contrast, conflicted with Vygotsky's notion of zone of proximal development. Emily seemed unable to achieve a richer understanding of floating and sinking despite being assisted by an adult. Unlike Jessica, she took little benefit from her engagement with the experimenter, and this suggests a potential methodological problem with this study. ...read more.