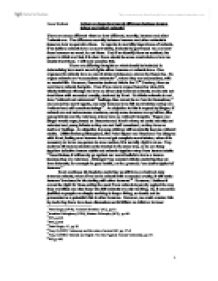 Is there an important moral difference between human beings and animals

There are many different views on how different, morally, humans and other 1animals are. The difference morally between humans and other animals is based on how we perceive them. In regards to morality importance of animals, if we believe animals have no moral status, it should be portrayed we can treat them however we want, i.e. eat them. Yet, if we identify them as sentient, the power to think and feel, it is clear there should be some constraints on how we should treat them. I will now examine this. There are differing thoughts on what should be included in determining how much moral rights either humans or animals have. One argument is animals have no moral status whatsoever, shared by Descartes. He argues animals are 'unconscious automata'1, where they are unconscious, with no mental life. However, Descartes declared this in the 17th Century, thus we now know animals feel pain. Even if one was to argue Descartes view, it is widely believed although we have no direct duty towards animals, we should not treat them with unneeded cruelty, declared by Kant. He thinks animals do not have 'rational and automanus'2 feelings, thus cannot be an 'end to themselves,' 3 and cannot be moral agents, and only humans have full moral status as they are 'rational and self-conscious beings'4. ...read more.

Stephen Clark states a good point against Frey; to an extent, animals have interests and morality by taking into account their2'roots of conscious' their virtues towards their master, like a dog staying faithful to its master. 16 On the other hand though, it can be said these virtues are not a moral agents; the animal does not become a better person out of it. Thomas Regan argues against Frey's thesis, stating we desire something, without actually realizing we do so. He believes it is not necessary for any individual, human or non-human; to be aware it desires in order to be capable of desiring, thus qualify for morality and interests. 17 But, I believe this is just a sleight of hand, where he confuses mental states with mental events. To justify these arguments above, we must look at whether animals are sentient. Singer declares animals do suffer, as they feel pain, thus are sentient, declaring 'pain is a state of consciousness' so can never be observed. 18 Thus, how can we tell another being are suffering as we have only our experiences for it. This is backed by Darwin in his 'descent of man', declaring; 'there is no fundamental difference between man and the higher mammals in their mental facilities'. ...read more.