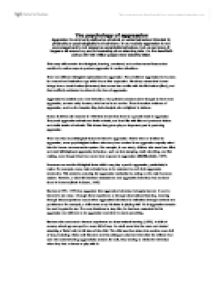 The psychology of aggression: examining the biological, learning, emotional, and environmental factors that combine in various ways to produce aggression in various situations.

The psychology of aggression

Aggression is commonly defined as physical or verbal behaviour intended to physically or psychologically hurt someone. In our society aggression is not encouraged and is not viewed as acceptable behaviour, but, as we know, it happens all around us, and is increasing at an alarming rate - in the twentieth century 80-100 million people were violently killed.

This essay will examine the biological, learning, emotional, and environmental factors that combine in various ways to produce aggression in various situations.

There are different biological explanations for aggression. Freud believed aggression for humans is a natural and instinctive urge which has to find expression. His theory states that human beings have a death instinct (khanates) that comes into conflict with the life instinct (Eros), and that conflict is redirected to others in the form of aggression.

Aggression is certainly not a new behaviour. Our primate ancestors were thought to have been aggressive, as were early humans, who had to be to survive. There is ancient evidence of aggression, such as the Assyrian king Ashurbanipal, who delighted in violence.

Ruston & Others did research in 1986 that shows that there is a genetic basis in aggression. They took aggressive animals and timid animals, and bred like with like and produced vicious and docile strains of animals. This shows that genes play an important part in producing aggression.

There are also neurobiological factors involved in aggression. Rather than an instinct for aggression, some psychologists believe what may have evolved is an aggressive capacity wired into the human neuromuscular system. For example, in one study, children who were born blind and deaf still displayed aggressive behaviour, such as foot stamping, teeth clenching, and fist making, even though they have never been exposed to aggression (Eibl-Eibesfeldt, 1977).

Hormones are another biological factor which may play a part in aggression, particularly in males. For example, many male animals have to be castrated to curb their aggressive tendencies. This works by reducing the aggressive motivation by acting on the male hormone system. However, a clear link between testosterone and aggressive behaviour has not been found in humans (Brain & Susan, 1997)

Bandera (1973, 1977) has suggested that aggressive behaviour is largely learned. It can be learned in two ways - through direct experience or through observational learning. Learning through direct experience occurs when aggressive behaviour is maintained through rewards and punishment. For example, a child wants a toy his sister is playing with. He is aggressive towards her and he gets the toy. If no one interferes to stop him, he has been rewarded for his aggression and will tend to be aggressive next time he wants something.

Bandera also conducted a famous experiment on observational learning (1979). A child of nursery school age was put in a room full of toys. An adult came into the room and started attacking a ‘Bubo’ doll, in full view of the child. The child was then taken into another room full of toys, including a Bubo doll. Bandera and his colleagues observed that after the children had seen the adult behaving aggressively towards the doll, they tending to mimic the behaviour when they had a chance to play with it.

An everyday example of observational learning is watching violence on television. In the 1990’s, children watched an average of 26 hours of TV a week (National Centre for Children Exposed to Violence, 2001). Almost every day of their lives, children see aggressive behaviour on TV. In one early study on the effects of TV violence, children were randomly assigned to two groups: one group watched violent cartoons on 11 different days, the other group watched the same cartoon with the violence removed (Steer, Apple field, & Smith, 1971), The children who watched the violent cartoon were more likely to kick, choke, and push their playmates than were the group who watched the non-violent cartoon.

Another study by Anderson & Dill (2000), showed a correlation between the amount of time playing violent video games and aggressive delinquent behaviour.

There are many emotional factors that can produce aggression. They include physical pain, personal insults, and unpleasant events such as divorce. Dullard et al (1939) put forward his frustration/aggression hypothesis in which he suggested that aggression is always linked to frustration, but that we do not always vent our frustration on its source. Dullard suggested that aggression may be delayed, or directed at a more acceptable outlet. While it is true that we have all lashed out at something or someone when we are frustrated, it does not seem reasonable to assume that every time we are frustrated we become aggressive.

Zelman’s excitation/transfer theory suggests that aggression occurs as a result of transfer of arousal from one context to another (1979, 1988). This may come from an emotional state from another source. This could be the reason why there is a rather high rate of violence at sporting events. The crowd becomes aroused from watching their team compete. If they are provoked, either by a verbal or physical attack, the likelihood of them reacting aggressively is higher than if they were not previously aroused.

Rotten & Frey (1985) showed that reports of family disturbances rose on days when the temperature was high and the winds were low. This caused air quality to be at its worst.

There is considerable evidence to support the theory that people act more aggressively when outside temperatures rise. Pen rod (1986) conducted an analysis of the annual crime reports issued by the FBI over a 10-year period. The results showed that the incidence of murder, rape, and aggravated assault increased notably during the third quarter of the year (July-September). The US Riot Commission (1968) cited hot weather as a cause of riots. However, research has found that aggressive tendencies are mediated by the amount of discomfort people feel (Baron, 1977). The highest levels of aggression are felt when discomfort is at an intermediate level, with lower tendencies towards aggression when there are very high or low levels of discomfort.

In conclusion, there is no single cause of aggression. Research has shown that a number of biological, learning, emotional, and environmental factors come together in various situations to produce aggressive behaviour.