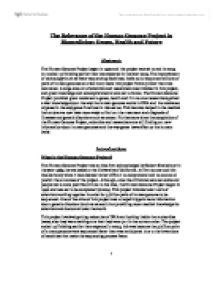 The Relevance of the Human Genome Project in Biomedicine: Genes, Health and Future

The Relevance of the Human Genome Project in Biomedicine: Genes, Health and Future Abstract: The Human Genome Project began in 1990 and the project was set to end in 2005 but ended up finishing earlier than was expected in the year 2003. The improvement of technology (such as faster sequencing machines; these could sequence millions of pairs of human genomes at a fast rate) made this project finish quicker then was calculated. A large amount of scientists and researchers was involved in this project, and great knowledge and accomplishments were set to follow. The Human Genome Project provided great relevance to genes, health and future once researchers gained a vast knowledge about the way the human genome works in DNA and the relevance of genes in the way genes functions in tissues too. This has also helped in the medical industry as we now have more ways to find out the treatment and diagnosis of illnesses and genetic disorders such as cancer. ...read more.

Also the Human Genome Project has helped certain drugs to be developed in which they target errors encoded in genes. These DNA sequences can be seen in computers where they are kept in databases. This makes it easier for researchers to look for DNA sequences and also this is where the bioinformatics comes through. This is where researchers use the computers are used to interpret the biological data that is being presented. Relevance of the Human Genome Project in Genes and Health: Since the Human Genome Project was completed in 2003, the medical industry has a far better knowledge of how genes can contribute to the health of an individual. This shows how important genes are when it comes to finding the diagnoses and treatment of human diseases. Another relevance of genes in the Human Genome Project is that whenever there is an error in a gene that occurs, researchers can tell when this happens. Thus helping to find the diagnosis and treatment of disease and also preventing the disease from occurring again. ...read more.

This is useful for patients who would get a certain side effect from a drug they have been prescribed to take; also this shows it is a better drug for the general public to take. Conclusion: Since the completion of the Human Genome Project in 2003 this has led to the development of the treatment, diagnosis (since we now know how the genes can cause certain diseases this can help to diagnose certain illnesses) and a better understanding to diseases, especially ones caused by defects in genes. This has enabled researchers to gain a better understanding about the way genes work and their functions in the human body. Not only has this been a great benefit to researchers and scientists but to the general public as well since we have gained a far better knowledge into the way the human genome works so this information can be used to treat people. There are still many things to research about ever since the completions of the Human Genome Project in 2003 since scientists are always discovering new things all the time that is making a great impact to science as a whole. ...read more.