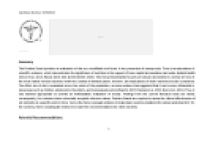 Transfer-Encoding: chunked ﻿Candidate Number: Z0 948612 ???? Summary This Position Stand provides an evaluation of diet as a modifiable risk factor in the prevention of osteoporosis. There is an abundance of scientific evidence, which demonstrates the significance of nutrition in the support of bone capital accumulation and wider skeletal health (Wood et al., 2013; Rizzoli, 2008; Ilich and Kerstetter, 2000). This text predominantly focuses on Calcium and vitamin D, as they are two of the most heavily revised nutrients within the context of skeletal system, however, the implications of wider nutrients are also considered. The effect size of diet is evaluated across the whole of the population, as some evidence has suggested that it can be more influential in sub-groups such as children, adolescents, the elderly, and menopausal women (Bianchi, 2007; Hannan et al., 2000; Neer et al., 2001). Thus, it was deemed appropriate to provide an individualistic evaluation of society. Findings from the current literature body are varied, consequently, few nutrients have universally accepted reference values. Position Stands are required to assess the clinical effectiveness of set nutrients at a specific point in time. Curre-ntly, there is enough evidence to make basic recomm-endations for calcium and vitamin D. On the contrary, there is inadequate evidence to make firm recommendations for other nutrients. Potential Recommendations: Calcium intake: >500 mg/d Vitamin D intake: >400IU The implications of wider modifiable risk factors such as physical activity and hormone regulation are also considered within this text. Some evidence has indicated such factors can alter the effects that certain nutrients have on the skeletal system (Winters and Snow, 2001; Turner and Pavalko, 1998). In light of these findings, it could be suggested wider considerations need to be made in the development of future reference values. Moreover, this text briefly considers a multi-factorial approach to controlling the effects of osteoporosis, as a method of yielding more substantial results. ...read more.

Thus, there is some evidence that supports positive effects of vitamin D in older adults with already compromised BMD, this however, was not reflected across the rest of the population. Some research has identified that children and adolescents that regularly consume the RDA for calcium and vitamin D, have greater BMD readings at the hip and lumbar section of the spine (Heaney, 2003). In addition, Lamberg-allardt et al. (2001) observed increased BMD and peak bone mass in adolescents who consumed > 400 IU of vitamin D. Such findings are important because bone capital accumulation acquired earlier in life, has demonstrated a relative effect on peak bones mass during adulthood (Brown et al. 1999). Similarly to the previous research, the overall effect size of vitamin D trials is small, however, the evidence base supporting the effect of vitamin D in children and adolescents is relatively consistent. Holick et al. (2006) concludes that there is an acceptable evidence base to support the requirements for vitamin D intake in children and adolescent, for purposes of skeletal health and growth. Taken together, there is some evidence to suggest consuming >400 IU of vitamin D could result in reduced bone accretion. In addition, there is a strong evidence body associating adequate vitamin D consumption with reduced fracture risk. Thus, consuming over >400 may be advisable. However, the evidence linking vitamin D and BMD is inconsistent. Studies reviewing the effects of vitamin D on BMD indicated that the observable effects were minimal, although they were more significant in elderly individuals. Studies reviewing adolescents were more conclusive, and thus, consuming an adequate amount can be considered more important to this population. Wider vitamins and minerals Even though much of the research instils calcium and vitamin D are the most important nutrients in the context of skeletal health, several studies have suggested other vitamins and minerals play a role in bone metabolism, and thus, could impact an individual?s likelihood of suffering with osteoporosis. Nielsen et al. (2011) undertook a 2-year longitudinal (mineral) ...read more.

Largely supported by epidemiological and fracture prevalence studies with significant strength (Turner, Anderson and Morris, 2012). Generally support by clinical evidence with varying levels of strength. A Vitamin K Contributes to the carboxylation of glutamic acid, and thus, is used in the production of osteocalcin. Numerous studies have reported elderly individuals that consume food rich in vitamin K are less likely to suffer with fragility fractures. Studies are yet to revise the isolated effects of vitamin K on fracture risk or BMD (Booth et al., 2000). B Vitamin C Contributes to the hydroxylation of lysine and proline, and thus, is utilised during the cross-linking of fibrous collagen. Some studies revising wider nutrient intake have suggested vitamin C could help maintain BMD. However, findings are both minimal and inconsistent (New et al., 2000). C B vitamins Vitamins B6 and B12, are used during the synthesis of homocysteine and amino acids. Thus, they could have protective properties that act against osteoporosis. Some studies revising wider nutrient bodies have linked lower vitamin B6, 12 intake with greater fracture risk in elderly populations. However, few studies have made substantial claims about vitamin B intake; and those which have typically demonstrate C Magnesium Utilised during bone formation. Some studies have reported that deficiencies in older individuals can potentially result in accelerated bone accretion in elderly populations (Tucker et al., 1999). Findings are scarce and largely based on wider studies revising fruit/ vegetable intake. C Zinc Utilised during bone tissue renewal and mineralization. Numerous studies have reported that deficiencies in older individuals can potentially contribute to impaired bone status (Nriagu, 2007). Findings are largely derived from wider studies, however, findings are more consistent than those observed in other nutrients. B Copper Used in the formation of bone mass and collagen tissue. When combined with zinc also inhibits bone resorption. Some studies have recently associated copper deficiencies with accelerated bone accretion. However, findings are recent and considered as preliminary (Lowe, Fraser and Jackson, M, 2002). C Grade A = strongest evidence body Grade B = relative evidence body Grade C = limited evidence body ...read more.