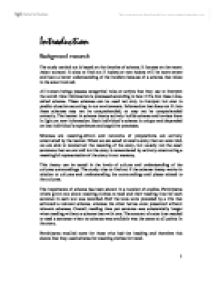 The study carried out is based on the theories of schema. It focuses on the recent Asian tsunami.

Introduction Background research The study carried out is based on the theories of schema. It focuses on the recent Asian tsunami. It aims to find out if Asians or non-Asians will be more aware and have a better understanding of the incident because of a schema that relate to the area involved. All human beings possess categorical rules or scripts that they use to interpret the world. New information is processed according to how it fits into these rules, called schema. These schemas can be used not only to interpret but also to predict situation occurring in our environment. Information that does not fit into these schemas may not be comprehended, or may not be comprehended correctly. The learner in schema theory actively builds schema and revises them in light on new information. Each individual's schema is unique and depended on that individual's experiences and cognitive processes. Schemas are meaning-driven and networks of propositions are actively constructed by the learner. When we are asked to recall a story that we were told, we are able to reconstruct the meaning of the story, but usually not the exact sentences that we are told but the story is remembered by actively constructing a meaningful representation of the story in our memory. This theory can be tested in the levels of culture and understanding of the cultures surroundings. The study tries to find out if the schema theory works in relation to cultures and understanding the surroundings and places related to the cultures. The importance of schema has been shown in a number of studies. Participants where given text about washing clothes to read and their reading time for each sentence in each text was recorded. Half the texts were preceded by a title that activated a relevant schema, whereas the other halves were presented without relevant schemas. Overall, reading time per sentence was substantially longer when reading without a schema than with one. ...read more.

This question, as analysed before, can be concluded that it does not require the schema of being an Asian and may fall into the category of general knowledge. This pattern is also similar with question 3. Whereas, the graphs that shows the results of questions 2 and 4 show that there is a varied result between the two groups. From this it can be concluded that these were the questions that required a schema of the Asian culture and understanding as from the graphs we can see that the Asian produced with a lot more correct results. Relationship of results to hypothesis As can be seen on the graph Asians have provided with more correct answers than non-Asian on the topic of the Asian tsunami. This shows that they must have a better understanding of the Asian cultures and the geographic area therefore have better understanding and memory of the disaster. The research hypothesis is therefore accepted that, Asian people will have a better understanding of the Asian tsunami as they have a schema of the Asian culture and framework. Discussion Validity As this is a psychology experiment the chances for complete accuracy in measurements are hard to gain as it is quite hard to measure anything psychological. In the study, questionnaires have been used. This may have problems such as some people may lie in questionnaires. They may also have problems such as forced answers that may not necessarily relate to the answer that they want. Another problem that may arise by using questionnaires as a form of study apparatus is that they may have questions that are biased or asked in a provoking manner and some questions may not cover all aspects of a particular subject. Other problems that may arise are things such as some participants may try to guess the answers to the questions. The problems with the independent variable are that in the two conditions, the males and females may not be a representation of the group that is being studied. ...read more.

This is similar to the studies that where investigated in the introduction. The War of the Ghost showed that people could not remember as much as they could in detail about some of the Native American details, but they could remember details that they could personally relate to and understand. So a canoe would become a boat. This relates to the Asian tsunami study in ways which show that people may understand more about the Asian tsunami because it occurred in an Asian surrounding and a place where there are things which Asians can relate to better than non-Asians could. The non-Asians are like the participants in the war of the ghosts. They can relate to the incident by adapting it to their own understanding. This does mean that they would not understand the scale of the incidents as if it had occurred in a non-Asian surrounding it would be different and that would be how they would be trying to relate it to. The scale of devastations would be different and because the infrastructure of the countries in the more developed countries would be different the way things are dealt with would be different and that would be how the non-Asians might presume to happen. Generalization and application The finding from this experiment is applicable to everyone. As everyone belongs to some culture and everyone has been brought up with different schemas and ways of life. They will be prone to understanding better if something happens in their environment than if it happens in another cultures environment. So even objective news items from around the world will be understood and remembered better by some people than others. This may not sometimes apply to people that come from mixed cultures or some that may have a good and widespread understanding of all cultures and how it works. This will help people to understand that sometimes it is easier for one person to understand about a subject better than what someone else could understand it. Appendix Study information: http://penta.ufrgs.br/edu/telelab/2/war-of-t.htm http://www.psybox.com/web_dictionary/WaroftheGhosts.htm http://education.yahoo.com/reference/bartlett/ http://www.coedu.usf.edu/kealy/B&J.html http://pluto.fss.buffalo.edu/classes/psy/segal/416f2001/schema/Serenadepicture.html http://www.psy.ohio-state.edu/psy312/bransford. ...read more.