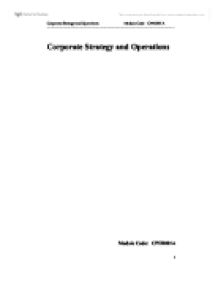 Corporate Strategy and Operations Module Code: CPH2001A Tutor: Graham Webster Student Id 9907031 Index Part 1. Introduction page 3 Part 2. Part 3. Part 4. 1. Analyse and evaluate the industry environment in which Marks and Spencer operates. 1.1 Overview Marks & Spencer (M&S) is one of the UK's leading retailers of clothing, foods, homeware and financial services, serving 10 million customers a week in over 300 UK stores. The Company also trades in 30 countries worldwide, and has a Group turnover in excess of �8 billion. Marks & Spencer is the UK's leading clothing retailer with more than 12.4 million square feet of trading space across 312 British stores. The Company also trades on-line at www.marksandspencer.com. (Source Marks and Spencer.com) The Group employs more than 60,000 people worldwide. In 2000/01 Group turnover was �8.1bn and profits before tax and exceptional items were �480.9m. The Company operates further wholly owned stores in the Republic of Ireland and Hong Kong and has 131 franchise stores in 28 countries operating through a network of successful partnerships.(Source Marks and Spencer.com) The group's financial services business provides customers with a range of products including account cards, personal loans, unit trust management, life assurance and pensions. Retailing accounted for 96% of fiscal 2001 revenues and financial services, 4%. M&S also operate a catering service (lunch to go.com) coffee shops (Caf� revive) and the online sale of personalised cakes and flowers. Though turnover primarily relies on the clothing sector, M&S have been eager to diversify and place great emphasis on food and have opened several food only retail outlets in Scotland and England. Such a diversified approach means that Marks and Spencer compete with various rivals either directly or indirectly. Identifying direct like for like competitors can be of particular difficulty. As M&S compete with banks, flower shops, coffee shops, catering firms etc. Though M&S diversified approach bears a canny resemblance to that of the supermarket sector though one can derive that the importance of primary and secondary products is reversed. ...read more.

This enables M&S to respond to local tastes and thus identify opportunities within the local sector. This not only allows M&S to stock products according to geographical demand an account for local taste it also enables M&S to identify local price elasticity and price products accordingly and thus maximise profitability however major price difference according to region are likely to be frowned upon by the government and may warrant investigation by the competition committee. Decentralisation of control also enables M&S to be more customer orientated and respond to demand this has been enabled by a change to a task culture, Inability to adapt to different geographical trends was a prime reason for M&S failure within the foreign markets, as such M&S is attempting to ratify the situation by the use of a trade franchise this has enabled M&S to enter new markets such as India whilst placing the risk on the franchisee. Additionally this acts as a pilot scheme allowing M&S to identify whether entrance in to a particular market is feasible and allows them to accumulate knowledge of which products are of particular importance within this market 3.2 Price In order to achieve low priced products M&S has slashed nearly 4,000 jobs, shuttered 38 money-losing stores in Europe, and spun off poor performers like clothing retailer Brooks Brothers and Kings Super Markets Inc. The decision to sever longstanding ties with British suppliers and shift three-quarters of all apparel production overseas has boosted clothing margins. 3.3 Quality To fix M&S, the 50-year-old Belgian executive has ushered in a younger and hipper management team, replacing all of its senior managers as well as board members, whose long tenure incited unfavourable 3.4 Innovation Evidence suggests that in terms of iniative and innovation M&S has in the past lagged behind competitors and has continually followed market leaders. Illustrations of this are M&S reluctance to embrace technology prime examples being That M&S did not accept credit cards till 2000 almost a decade after the majority of the retail ...read more.

to rebuild a damaged image in the past and current spending on corporate responsibility indicates this is not an area in which M&S wants to find itself once more. 4.15 Franchising and food only stores The use of franchised store is another intelligent ploy implemented by M&S as it has allowed M&S to enter new markets whilst placing the risk on the franchisee. This will allow M&S to discover areas of potential and identify which products are of interest and which are not. The introduction of Food only stores was identified in the article (Financial times, Dazzling times on way back for M&S; Shares hit two-year high) As a potential area of future investment for M&S indeed M&S has opened two food only outlets in Scotland. The implementation of such investment has been in line with M&S gradual approach as M&S are currently monitoring the success of these stores and have yet to decide whether to continue with such a venture until they have ascertained whether these stores will experience long-term profitability. This approach is probably the best due to the looming recession 4.16 Vertical integration The acquisition of suppliers is likely to enable greater cost cutting and will enable M&S to gain exclusive access to products. However such an acquisition may be considered risky as though M&S have experience of the clothing retail. They are unlikely to have equal knowledge of manufacturing procedures and processes. Adapting to such a change will initially be very costly as will the acquisition of the supplier. Though I believe in the long-term such an acquisition will benefit the firm. The impending recession means such an acquisition cannot be justified as such expenditure is likely to hinder cash flow and reserves, which may be of vital importance in a recession environment. As such supplier acquisition is a definite investment that should be considered though such acquisition must be utilised during a period where economic prosperity is likely to continue to rise not when an imminent fall is likely. ...read more.