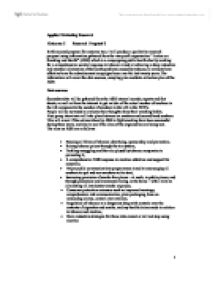 Applied Marketing Research Outcome 2 Research Proposal 2 In this second proposal for outcome two, I will produce a qualitative research proposal using information gathered from the non-profit organisation " Action on Smoking and Health" (ASH) which is a campaigning public health charity working for a comprehensive societal response to tobacco aimed at achieving a sharp reduction and eventual elimination of the health problems caused by tobacco, to evaluate how effective have the advertisement campaigns been over the last twenty years. The information will reveal the data sources, sampling plan and data collection plan of the ASH. Data sources Secondary data will be gathered from the ASH internal records, reports and fact sheets, as well as from the internet to get an idea of the actual number of smokers in the UK compared to the number of smokers in the UK in the 1970's. People will be surveyed to evaluate their thoughts about their smoking habits. Also group interviews will take place between ex smokers and second hand smokers This will reveal if the actions taken by ASH to fight smoking have been successful during these years, and also to see if the aims of the organisation are being met. ...read more.

There has been a slower decline in smoking among manual groups, so that smoking has become increasingly concentrated in this population. As in previous GHS surveys, the 2003 data revealed an association between socio-economic group and the age at which people started to smoke. Of those in the managerial and professional households, 29% had started smoking before they were 16, compared with 44% of those in routine and manual households. Large Employers & Higher managerial Higher professional Lower managerial & professional Intermediate Small employers /own account Lower supervisory and technical Semi-routine Routine Men 15 16 24 29 28 30 34 39 Women 14 13 19 22 24 27 32 34 Prevalence of cigarette smoking by socio-economic classification based on current or last job of the household reference person. Persons aged 16 and over. Great Britain: 2003 (%) As the graphic above shows there are big differences between the differents socio-economics groups in their smoking habits, showing that the lowest income households are the ones in which more people smoke, and this will be where we should put more effort to reduce that number of smokers. Data collection plan Data is collected through surveys and group interviews as well as online through the AHS website and other internet sites. ...read more.

In 1974, 51% of men and 41% of women smoked cigarettes - nearly half the adult population of the UK. Now just over one-quarter smoke, but the decline in recent years has been heavily concentrated in older age groups: i.e., almost as many young people are taking up smoking but more established smokers are quitting. Smoking is highest among those aged 20-24: 38% of men and 34% women in this age group smoke. Among older age groups prevalence gradually declines with the lowest smoking rate among people aged 60 and over: 15% smoke in this age group. This reflects the fact that many former smokers will have stopped in middle age and around one quarter of smokers die before reaching retirement age. More than 80% of smokers take up the habit as teenagers. In the United Kingdom about 450 children start smoking every day. About one fifth of Britain's 15 year-olds - 18% of boys and 26% of girls - are regular smokers - despite the fact that it is illegal to sell cigarettes to children aged under16. All this shows that the ASH has been doing a great job through these years but it also shows that a lot is still to be done to tackle this mayor problem as every year, around 114,000 smokers in the UK die as a result of their habit. 1 ...read more.