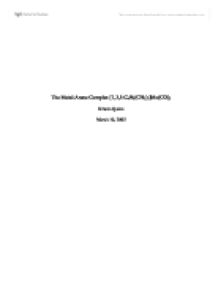 Attempting to make metal-arene complexes such as [1,3,5-C6H3(CH3)3]Mo(CO)3 stemmed from the similarities of the cyclopentadiene rings

The Metal-Arene Complex [1,3,5-C6H3(CH3)3]Mo(CO)3 Kristin Quinn March 10, 2005 Quinn 1 Kristin Quinn Intermediate Inorganic Chemistry 10 March 2005 Abstract This lab combines 7.6 mmol of Mo(CO)6 and 72 mmol of mesitylene to produce (Mesitylene)tricarbonylmolybdenum. The product, [1,3,5-C6H3(CH3)3]Mo(CO)3, is produced by boiling the two reactants for 30 minutes in an inert nitrogen atmosphere. The resulting crystals are then filtered and purified by dissolving in dichloromethane and precipitating out using hexane. An IR spectrum is then taken of the product. Introduction The proposal of attempting to make metal-arene complexes such as [1,3,5-C6H3(CH3)3]Mo(CO)3 stemmed from the similarities of the cyclopentadiene rings used to make ferrocene and benzene rings. Both rings have a 6-electron pi system. The first correctly identified complex made with two benzene rings and a structure similar to ferrocene was bis(benzene)chromium in 1955. The creation of this complex led to the synthesis of many other bis(benzene) compounds with transition metals. 1 Procedure The equipment needed for this experiment is as following: 250 mL 3-necked flask (with two stoppers), condenser, stir bar, hot plate, Buchner funnel for filtering, and an IR spectrometer. ...read more.

6. Suction filter and rinse with 5 mL of hexane. There should be yellow crystals along with tiny black dots of the molybdenum. 7. Purify the crystals by dissolving in a small beaker with dichloromethane and a stir bar. If the crystals will not dissolve, a small amount of heat can be added. 8. Filter the solution. Take the filtrate (the yellow solution left in the filtering flask) and add 25 mL of hexane. The product should precipitate out. If the product doesn't look like shiny, yellow crystals, it can be re-dissolved in the dichloromethane to purify further. 9. Wash the crystals with 4 mL of hexane twice. Allow drying under suction. 10. Take an IR of the product. Quinn 3 Data I ran an IR after the first purification of the product. The rationale for this was because I had white crystals with only a few black dots and after two purifications, I had only bright yellow crystals left (with the yellow crystals being the product that I should have used for the IR). ...read more.

(pg 166). The rest of the class had white crystals and their solution while boiling had turned black instead of the yellow-greenish color I had. I'm thinking that maybe that the solutions turned black because the flasks were not completely purged with nitrogen in the Quinn 4 beginning and the atmospheres were not inert. (I could be terribly wrong about this, but the lab says the product is yellow, which is what mine was.) Conclusion This lab combines 7.6 mmol of Mo(CO)6 and 72 mmol of mesitylene to produce (Mesitylene)tricarbonylmolybdenum. The product, [1,3,5-C6H3(CH3)3]Mo(CO)3 , turns out to be yellow crystals once purified. The IR taken indeed confirmed that the desired product was obtained. Questions and Answers 1. Why does the symmetric C-O stretch of a trans dicarbonyl complex have zero intensity? The complex has zero intensity because when the trans C-O bonds symmetrically stretch, they cancel each other. 2. Define all of the C-M-C bond angles. Isym = 3cot2(0/2)-1 ----- --------------- Ianti 4 By using this equation and the intensities of the two peaks at 2000 cm-1 (around 25 and 7% transmitted), you get the bond angles to be approximately 55.75 degrees. ...read more.