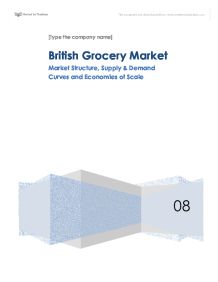 The grocery market in the UK is driven by 4 main Players: Tesco, Asda, Morrison's and Sainsbury (based on TNS till roll data each have overall market shares of more than 10 per cent)- their marketing policies determine the way consumers buy and want. The first part of the paper focuses on the description of the British grocery market and its structuture. There is a wide variety of different types of grocery retail operator. The CC (Competition Commission) report in 2000 is based on publicly available information, supplemented by data provided by the supermarkets and other retailers. The CC describes the market dividing it into 4 groups: * Supermarket multiples - including Asda, Morrison's, Sainsbury's and Tesco; smaller chains such as Summerfield, Waitrose and Marks & Spencer; and 'discounters' such as Aldi, Lidl and Netto * Symbol groups - can be loosely defined as multi-store chains where there is a single fascia, but where ownership can be fragmented: examples include Musgrave, which operates the Budgens and Londis fascias, and Spar * Co-ops - that is, co-operative stores, which usually operate in a similar way to symbol groups, and * Independents - stores which are independently owned and are not operated under a wider 'symbol' ...read more.

77). Demand is not fixed therefore there are factors affecting the demand and supply. What would be the impact on the price of potatoes sold in competitive supermarkets if: A business strategy is a long term plan of action designed to achieve a particular goal, most often win. Win is what all companies want but what is theirs strategy? An exact business strategic can be hard to determine, companies have their strategies in the mission statement. The Publix's mission statement according to their website is clear and easy: "Our Mission at Publix is to be the premier quality food retailer in the world. To that end we commit to be: passionately focused on Customer Value, intolerant of Waste, dedicated to the Dignity, Value and Employment Security of our Associates, devoted to the highest standards of stewardship for our Stockholders, and involved as Responsible Citizens in our Communities". A beautiful statement indeed. Wal-Mart's more 'profit-orientated'. As a national discount retailer, they offer a wide variety of general merchandise. Wal-Mart's uniqueness comes from a business strategy as radically innovative: * Boosted efficiency and productivity far ahead of their rivals by creating a new management paradigm for their particular industry; Pasted from <http://www.pbs.org/newshour/bb/business/wal-mart/unique.html * Sophisticated distribution system and ...read more.

The best way of cutting down costs is expanding the size and the output of the company: " As firms expand in size and output, their long run averages costs tend to fall" (Anderton, 2006, p.325). Expanded into retailing services and going international is how Tesco lower its costs. Larger companys such as Tesco are more likely to be able to buy raw materials in bulk which only means: lower prices. Some point, long run average costs become constant. However in this case, Tesco/s could became one of the firms that become too large and their average costs begin to rise. For instance , if Tesco's continue doubled is output they could face costs four times higher, then the average cost of production would double. Adtionally if government imposes a tax upon industry, costs will rise, shifting the diseconomies of scale curve upwards. This pattern of falling and rising long run average costs is show in figure below. To conclude: * Important factor in supermarket prices; * Larger scale = higher output = lower average costs; * E.g. Tesco 4-5% lower costs; * Wal Mart "Super Centres"; * Employ 400-500 wks 7-13% cheaper; * Average costs reduced- benefit: * Financial; * buying - bulk & bargaining power; * transportation; * marketing & distribution; * Use of advanced technology. ...read more.