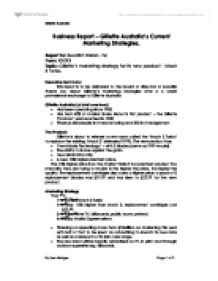 Business Report - Gillette Australia's Current Marketing Strategies. Report To: Swedish Razors. Inc From: XXXXX Topic: Gillette's marketing strategy for its new product - Mach 3 Turbo. Executive Summary: This report is to be delivered to the board of directors of Swedish Razors .Inc about Gillette's marketing strategies after a 6 week professional exchange to Gillette Australia Gillette Australia: (a brief overview) * Has been operating since 1980 * Has had 40% of market share since its first product - the Gillette 'Contour' was launched in 1980 * Employs 400 people in manufacturing and 320 in management The Product: Gillette is about to release a new razor called the 'Mach 3 Turbo' to replace the existing 'Mach 3' (released 1999). ...read more.

3. Promotion: TV, billboards, public stunts, printed. 4. Place: Mainly Supermarkets * Planning on spending more than $10Million on marketing this year with half of that to be spent on advertising to launch its new razor as well as a relaunch of its skin care range. * The new razor will be heavily advertised on TV, in print and through outdoor supersites eg. Billboards. * Gillette are planning public stunts in capital cities to get people to become familiar with the new product. For example, Gillette are planning to pay everyone's toll on one of the Sydney motorways during peak hour. For this, they would use advertising terms such as "Save time with Gillette's Mach 3 Turbo" * The aim is to get everyone ...read more.

Conclusion: For Swedish razors' advertising to be as successful as Gillette's, I have given the following recommendations: > Increase marketing expenditure from $3 Million to $6 Million > Spend more on product development > Release a new 'revolutionary' product that would appeal to young people. Eg a razor with 4 blades - make it sound like a massive breakthrough in razor technology- target it to younger customers and try to get some of Gillette's market share. > Have the cost of the actual razor low but have the cartridge price high and make most of your profit from that. > Sponsor a women's modelling show or something which will attract mainly males and get them to know about the product. Gillette Australia By Sam Hedges Page 1 of 2 ...read more.