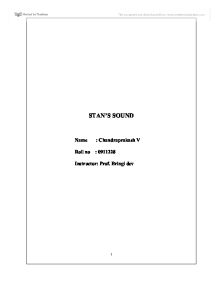 STAN'S SOUND Name : Chandraprakash V Roll no : 0911228 Instructor: Prof. Bringi dev Situation analysis Stan's sounds a company with a vision to setup a chain of outlets across Texas, sells standard sound equipments via Stan's sounds and customised products via Cen-Tex Audios. It has shown consistent growth in Westville and it has expanded to 3 shops in the same locality. Now the company has an opportunity to expand. Problem definition Though the objective of the company is to own a chain of stores, it is reluctant to expand aggressively since it just opened a new store in its locality. The company has to decide between expanding and postponing the expansion thereby concentrating on the local market. Objective Short term: To make sure the company does not undergo a liquidity crunch thereby affecting the business and to maximise the profit Long term: To establish economically strong chain of stores with wide market. Criteria for evaluating options On the basis of the objectives the list of criteria based on which the options could be evaluated are Financial viability, change in the Organisational complexity, Profitability and the Risk associated. ...read more.

1) From the graph it is clear that the debt to equity ratio is at acceptable level of less than 0.5 in the few years. Decreasing Debt to Equity ratio means proper back of the loan taken previously. 2) Its clear from the graph net profit of around 5 % is maintained. The first year loss can be attributed to the fact that it operated only for two months but the fixed expenses cannot be scaled down. The drop in the loss profit in 1977 can be attributed to Cen-Tex audio reducing its customer size. 3) The absolute value of asset turn over(around 3.5) seems fairly acceptable Hence it is more likely that the company will get their loan sanctioned. Organisational complexity Reporting structure: We have to appoint a new manager for the Wardlow shop. Since this increases the complexity of the structure, we have to form an efficient reporting structure which will form a basic frame work for future expansions as well. ...read more.

We cannot have a pooled resource since the orders are customised Experience: Nil. Expansion with Stan's sound with few customizable options This option suggests going for expansion with Stan's sounds but also taking orders for customizable option. Here the orders will be routed through Cen-Tex audio, Westville. Financial viability Loan: The financial viability will be similar to that of expansion with Stan's sounds. Inventory cost: similar structure as in option 1. Organisational complexity Reporting structure: We have to frame a new department or allocate space for customizable options in the shop. Employing additional person for the department can be decided depending on the initial response for the department. Rest is similar to option 1. Inventory structure: Pooled buffer inventory structure suggested in option 1 can be implemented here as well. Also there is no need for buffer inventory for customised radios. Opportunity: Cen-Tex expansion is possible depending on the response by the customers. Profitability Competition: Limited Risk: Moderate, risk of standard goods and to some extent customised gets added up. Profit margin: Limited number of options for customization, so profit won't be comparable to Cen-Tex audio. ...read more.