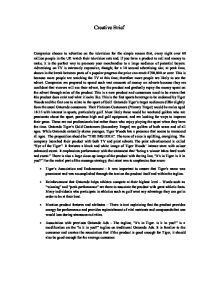 Creative brief - This is the first sports beverage to be endorsed by Tiger Woods and the first one to relate to the sport of Golf. Gatorade Tigers target audiences differ slightly from the usual Gatorade consumers. Their Platinum Customers (Primar

Creative Brief Companies choose to advertise on the television for the simple reason that, every night over 60 million people in the UK watch their television sets and, if you have a product to sell and money to make, it is the perfect way to promote your merchandise to a large audience of potential buyers. Advertising on TV is extremely expensive, though; for a 30 second advertising slot, at peak time, shown in the break between parts of a popular program the price can reach �700,000 or over. This is because more people are watching the TV at this time; therefore more people are likely to see the advert. Companies are prepared to spend such vast amounts of money on adverts because they are confident that viewers will see their advert, buy the product and gradually repay the money spent on the advert through sales of the product. ...read more.

The tone of voice is uplifting, energizing. The company launched their product with both TV and print adverts. The print advertisement is called "Eye of the Tiger". It features a black and white image of Tiger Woods' intense stare with colour enhanced sweat. It emphasizes performance with the statement that "being a winner takes hard work and sweat." There is also a large close-up image of the product with the tag line, "it's in Tiger. is it in you?" For the verbal part of the message strategy, the intent was to emphasize four areas: * Tiger's Association and Endorsement - It was important to ensure that Tiger's name was prominent and was accomplished through the text on the product itself and within the tagline. * Reinforcement that Gatorade helps athletes compete at their highest level - Words such as "winning" and "peak performance" are there to associate the product with great athletic feats. ...read more.

Rocky is a story of an underdog who succeeds in performing at his highest level through hard work, sweat, and determination. * Close Up of Product - The product of Gatorade Tiger is in a close up to emphasize the Tiger Woods association and to give the potential customer a good view of the new logo. Since this is a new product, the consumer needs to be able to identify the product while shopping. In the UK, Gatorade faced strong competition from Lucozade Sport, which holds a 42 per cent market share by value. But with endorsement from Lampard, Gatorade became as popular in the UK as it is in the US. With orange and lemon flavours available, Gatorade has already focused on its key market. Sponsorships and athlete endorsements are the key to driving success in the sports drinks categories and Gatorade became the official sports drink for the England football team for World Cup 2006. ...read more.