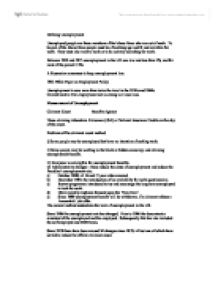 Defining Unemployment Unemployed people are those members of the labour force who are out of work. To be part of the labour force people must be of working age and fit and available for work. They must also want to work or to be actively searching for work. Between 1950 and 1975 unemployment in the UK was low and less than 5%, and for most of the period 2-3%. A Keynesian consensus to keep unemployment low. 1944 White Paper on Employment Policy. Unemployment is now more than twice the level in the 1950s and 1960s. Commitment to Full-employment not as strong as it once was. Measurement of Unemployment Claimant Count Benefits Agency Those claiming Jobseekers Allowance (JSA) or National Insurance Credits on the day of the count. Problems of the claimant count method i) Some people may be unemployed but have no intention of seeking work. ii) Some people may be working in the black or hidden economy, and claiming unemployment benefit. iii) Everyone is not eligible for unemployment benefits. iv) Administrative changes - these reduce the costs of unemployment and reduce the 'headline' unemployment rate. a) October 1988, all 16 and 17 year olds removed. b) December 1987, the introduction of an availability for work questionnaire. c) Restart programme introduced to try and encourage the long term unemployed to look for work. d) More recently emphasis focused upon the 'New Deal'. e) Since 1989 unemployment benefit will be withdrawn, if a claimant refuses a 'reasonable' job offer. The current method understates the level of unemployment in the UK. ...read more.

Now imagine that we have 20% inflation in the economy over a year. The interest rate charged by the lender is 10%. After the year the person repays the �110 (consisting of the �100 borrowed plus the �10 interest payment). However, with inflation at 20% the lender would need �120 to maintain the buying power of the original goods. There has been a re-distribution of money from the lender to the borrower. While in aggregate over a number of years the losses and gains will offset each other, the effects do not. Some lenders may become bankrupt, resulting in jobs being lost. Inflation effects UK competitiveness, and hence the balance of payments. Depreciation of the exchange rate by itself is not necessarily a bad thing, but the danger is that it can start a spiral. An initial depreciation causes price inflation to increase at home, which causes further wage increases, which leads to further depreciation and so on. Inflation can breed insecurity and industrial unrest. Among businessmen/women it increases uncertainty, reduces investment and reduces growth. German Hyperinflation The simplest way to envisage the scale of the inflation is to remember that inflation means the loss of a currency's purchasing power. What you could have bought for 1 mark in July 1921 would have cost 54,000 million marks in November 1923. In two years inflation had wiped out many people's savings, transforming a fortune into small change. Waves of panic buying left shops with nothing left to sell, while manufacturers, operating at full capacity, refused to accept new orders. In the final stages of hyperinflation, foreign currencies and emergency monies issued by state governments, chambers of commerce and private traders replaced the mark until 2000 different currencies were thought to be in circulation. ...read more.

Workers are unwilling 'to offer their services at less than prevailing rates when the demand for labour is low and unemployment is high so that wages fall only very slowly' (Phillips, 1958, P283). The first development in what was to become the complicated evolution of the Phillips Curve involved the substitution of price inflation for the rate of change of money wages, on the grounds that they are closely correlated. The Phillips Curve was immediately transformed into a map of the options facing macroeconomic policy makers, implying that monetary and fiscal policy measures are likely to be important factors in explaining demand-pull inflation. An expansion of aggregate demand would move the economy along the Phillips curve in a north-western direction from a to b as policy makers accepted higher demand pull inflation as the cost of reducing unemployment (Figure 3.3) Lower interest rates might be used to encourage borrowing to finance extra consumption and investment, taxes might be cut to stimulate consumption or government expenditure might be increased. If, on the other hand, the priority was to reduce inflation, higher interest rates or tax increases or cuts in government expenditure would move the economy along the Phillips curve in a south-easterly direction, for example from b back to a (Figure 3.3). Probably the most spectacular episode of demand pull inflation in recent years was the so-called "Lawson boom", named after the Chancellor of the Exchequer Nigel Lawson. In the 1988 budget there were significant income tax cuts. At the time, house prices were rising rapidly, and people felt wealthier and were prepared to borrow more money to increase consumption. However, perhaps the most striking feature of the UK Phillips Curve in the 1970s is that the inflation rate accelerated most rapidly when unemployment was either constant or also rising. ...read more.