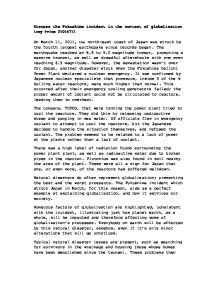 Discuss the Fukushima incident in the context of globalisation

Discuss the Fukushima incident in the context of globalisation Lucy Price 21014711 On March 11, 2011, the north-east coast of Japan was struck by the fourth largest earthquake since records began. The earthquake reached an 8.9 to 9.0 magnitude tremor, prompting a massive tsunami, as well as dreadful aftershocks with one even reaching 6.3 magnitude. However, the devastation wasn't over for Japan, another disaster stuck when the Fukushima Dalichi Power Plant declared a nuclear emergency. It was confirmed by Japanese nuclear specialists that pressure, inside 3 of the 6 boiling water reactors, were much higher than normal. This occurred after their emergency cooling generators failed; the proper amount of coolant could not be circulated to reactors, leading them to overheat. The company, TEPCO, that were running the power plant tried to cool the reactors. They did this by releasing radioactive steam and pumping in sea water. US officials flew in emergency coolant to attempt to cool the reactors, but the Japanese decided to handle the situation themselves, and refused the coolant. The problem seemed to be related to a lack of power at the plants rather than a lack of coolant. There was a high level of radiation found surrounding the power plant plant, as well as radioactive water due to broken pipes in the reactor. ...read more.

Ambiguous language and the refusal to verify even basic facts, lead Japanese to look at outside sources of information. A reason for the restrain of media coverage in Japan, may be explained by the fact terminology in Japan is considerably dissimilar to terminology that is English. It also may be due to politics. Japanese journalists have always been notorious for being unconvinced and suspicious about nuclear power, and this may have lead officials to merely release as little information as possible. Japan avoids conflict, which will escape making any direct references to challenging situations. The Japanese are retorting to the disaster, by continuing going to work every day and carrying on with their lives, regardless of the nuclear emergency, earthquakes and tsunami damage. Health and Environmental issues are the highest concern for Japan, as new information is being discovered daily. Exposure to radiation can document many health issues; it increases possibility of cancer. It may also cause mutations in DNA, which could be passed on to children born following the exposure. A large and sudden exposure to radiation exposure can be the origin to burns or radiation sickness. Symptoms for radiation sickness can consist of vomiting, faintness, loss of hair, burns to the skin and trouble functioning organs. ...read more.

Thailand relies on Japan for their equipment and products. Both South Korea and Thailand, for these reasons, have had to decline their production as a result of the earthquake. Regrettably this disaster functions as the ideal case for understanding globalization. The occurrence may have been confined to just Japan, but the effect of the disaster is entirely international. Japan will still be suffering with aftereffects of the catastrophe for decades to come. Decisions such as, where can all the contaminated water and other products be deposited, how can the people and residents housed near to the power plant be reimbursed, how much will it cost to fuel and reconstruct the economy, and what conventions will need to introduced to avoid the prospects of more nuclear plant emergencies occurring in the future, still need to be considered. The world has been able to reflect on this disaster, especially to reconsider the use of nuclear energy. It is normally seen as 'clean energy', related to oil & coal. Countries do have the problem of discovering substitute sources of energy to power their economies. Nuclear energy was considered an appropriate choice, despite its cost and storage difficulties. Evidently, safer systems and heavy organisation & forecasting needs to be carried out before placing any more nuclear power plants; finding the safest possible areas and building tougher support structures will make a colossal, and perhaps economy-saving, difference. ...read more.