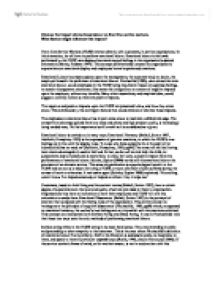 Discuss the impact of emotional labour on front line service workers. What factors might influence this impact?

Discuss the impact of emotional labour on front line service workers. What factors might influence this impact? Front Line Service Workers (FLSW) interact directly with customers, in service organisations. In this interaction, he will have to perform emotional labour. Emotional labour is that work performed by the FLSW who displays his emotions and feelings in the organisation's desired orientation (Morris, Feldman 1997). This concept differentiated between the organisation's expectations on emotional display and employees' actual experienced emotions. Emotional Labour has repercussions upon the management, the customer and, no doubt, the employee himself- the performer of emotional labour. Hochschild (1983), who coined the term emotional labour, would emphasise in the FLSW being required to induce or suppress feelings, to sustain this apparent orientation. She states this brings about a number of negative impacts upon the employee, without any benefits. Many other researchers, and empirical data, would suggest a contrary notion as there are positive impacts. The negative and positive impacts upon the FLSW are presented below, and how they come about. This is followed by the contingent factors that could enhance or alleviate these impacts. The emphasis on emotional labour has in part come about to maintain a differential edge. The competitive advantage gained from low costs and prices and high product quality, is increasingly being eroded away. ...read more.

this not only shows the effect of emotional deviance but also the effect of the longevity of the interaction upon the interaction. This type of emotional labour being experienced could lead in one direction: 'A rude flight attendant is likely to be fired' or punish you for this act or the FLSW will quit himself. A student worker at a cosmetics firm: 'I couldn't bring myself to act happy and enthusiastic enough.' She was unable to come to terms with the local feeling rules and thus quit working. This shows that she much rather be unemployed than be in an interaction that she cannot endure. Stress, detachment, depersonalisation and self estrangement are all related and based on the idea of alienation developed by Marx- alienation from the product, but here the emotions are the product, leading to the alienation from the self. She contends that this leads, in the long term, to emotional exhaustion. The workers then become analogous to a 'mechanical nut' (Ritzer, 1996, pg139) and a 'human robot'. The constant pressure of emotional labour is leading these labourers to turn to alcoholism, and drug abuse with increasing headaches, absenteeism and sexual dysfunction (Hochschild, 1983, cited in Rafaeli, Sutton 1987, pg31). ...read more.

An additional point can be the way they design the job. Are they required to perform in certain ways, or do they have the freedom? Emotional labour can bring about negative impacts no matter how well the individual identifies with the role played by the employees. Operators who have been working in call centres for a long time still find the type of service work to be harmful. The more the frequency of service interactions, the more they relish the break they receive, when acceptable to management. FLSW can type the customer and this would help negate factors that could cause problems. Customers who come just for window shopping sometimes get in the way of good customers and the retail outlet may miss a sale. Typologies can help prevent such realities. The performance of emotional labour in the economy is on the rise and so too would the impacts that emanate from it. Positive impacts include fun, excitement and reward when performing emotional labour as a comic relief, as a fix, and as an altruistic service. Negative impacts include stress, detachment, depersonalisation and self estrangement due to the alienation from the self's emotions resulting in exhaustion and dissonance. The factors that would influence these factors would include the organisation's approach to the management of service work and the type of HRM policy implemented, the type of service work performed, and the worker's coping and resistance methods. ...read more.