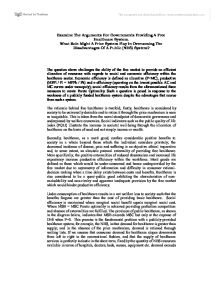 Examine The Arguments For Governments Providing A Free Healthcare System - What Role Might A Price System Play In Overcoming The Disadvantages Of A Public (NHS) System?

Examine The Arguments For Governments Providing A Free Healthcare System. What Role Might A Price System Play In Overcoming The Disadvantages Of A Public (NHS) System? The question above challenges the ability of the free market to provide an efficient allocation of resources with regards to social and economic efficiency within the healthcare sector. Economic efficiency is defined as allocative (P=MC), productive (MPPl / Pl = MPPk / Pk) and x-efficiency (operating on the lowest possible AC and MC curves under monopoly); social efficiency results from the aforementioned three measures to create Pareto Optimality. Such a question is posed in response to the weakness of a publicly funded healthcare system despite the advantages that accrue from such a system. The rationale behind free healthcare is twofold; firstly, healthcare is considered by society to be universally desirable and to ration it through the price mechanism is seen as inequitable. This is taken from the moral standpoint of democratic governance and underpinned by welfare economics. Social indicators such as the public quality of life index (PQLI) illustrate the increase in societal well-being through the allocation of healthcare on the basis of need and not simply income or wealth. Secondly, healthcare, as a merit good, confers considerable positive benefits to society as a whole beyond those which the individual considers privately; the ...read more.

training more doctors & nurses, building hospitals, providing more equipment etc) then in due course the supply curve will shift to the right to equate supply with demand when price equals zero. However, the suggestion that a significant increase in supply will eliminate the waiting list assumes that the demand curve is static, which experience has indicated to the contrary in that demand for healthcare increases over time behaving in a somewhat counter-intuitive way. Says Law, as it is sometimes referred to, provides a rare example in economics of supply 'creating its own demand'. One of the most fascinating aspects of the market for healthcare is the view frequently put forward that the success of the NHS in providing universal healthcare free at the point of access has led to increasing social awareness about health and rising expectations among the population of better health, as well as rising real incomes, an ageing population, increased expectations and the availability of new medical technology. Increased supply of healthcare is constrained by the likely need for still further increases in resources to satisfy further rises in demand. The provision of public health system, such as the NHS however is argued to be significantly more productively efficient with regards to economies of scale in comparison to the private healthcare systems of continental Europe and the USA. ...read more.

The foreseeable problem with a healthcare system wholly dominated by a price-mechanism would be social unfairness with regards to providing healthcare to poorer people and the fear of under-consumption of healthcare due to its merit and public good properties; notwithstanding over consideration of the profit motive to 'cut corners' within healthcare, for example, the NHS repeats the AIDs test three times whilst private health companies in the UK carries out the test only once on the same blood sample. Perhaps a 'private-public partnership' would provide greater social efficiency whereby only certain elements of healthcare were co-ordinated through the price mechanism and the majority publicly provided. One idea, adopted in Sweden, is to charge patients for appointments. As well as providing an additional source of income for the NHS, it would also decrease the number of time wasters in GP waiting rooms. This charge would also encourage patients to make more use of services provided by pharmacies and NHS Direct thereby reducing the workload of GPs. To ensure that the poor and elderly aren't discouraged from seeking treatment, exemptions could be made based on income or age. 1 An indication of the poor morale is shown in the recent General Practitioner Committee's ballot in which 56% of all GPs voted to hand in their resignations next year if a new contract with the Government is not reached. ...read more.