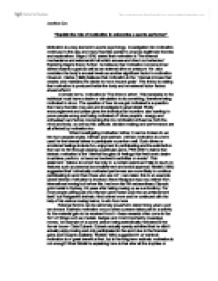 &quot;Explain the role of motivation in enhancing a sports performer&quot;

"Explain the role of motivation in enhancing a sports performer" Motivation is a key element in sports psychology. Investigation into motivation continues to this day and many theorists persist to propose legitimate theories and explorations. Sage (1974) stated that motivation is 'The internal mechanisms and external stimuli which arouse and direct our behaviour'. Exploring Sage's theory further, he believes that motivation concerns inner drives towards a goal as well as an external drive or pressure. He also considers the body's arousal levels as another significant factor in motivation. However, Clarke (1999) believes that motivation is the 'Internal process that creates and maintains the desire to move toward goals'. This theory is stating that motivation is produced inside the body and no external factor factors should affect it. In simple terms, motivation is 'The drive to strive'. This translates to the individual must have a desire or stimulation to do something, therefore being motivated to do so. The question of how do we get motivated is a question that many theorists may ask and investigate in great detail. Firstly encouragement and praise gives the individual an incentive, also wanting to prove people wrong and being motivated off other people's energy and enthusiasm are factors concerning this too. ...read more.

Galligan et al. (2002) defined arousal 'Arousal is the level of psychological readiness'. Our body's arousal levels have vast consequences on our ability to perform certain things. Arousal affects; performance, attitude and finally learning of skills. The effects of arousal on the mind and body can be both positive and negative. We can both be over and also under aroused, both of these factors lead to a decline in performance. Motivation has a very big effect on arousal, motivation leads to a state of arousal due to adrenaline being produced, which consequently has physiological responses such as an increase in heart rate for example. If a performer controls their individual arousal levels during or even before their event, then it can be very beneficial. Over arousal is very easy to fall into the trap of. When this occurs, we s not think clearly therefore our decision making ability decreases and becomes more erratic. This results in poor rushed decisions and a drop in performance. An example of over arousal is Wayne Rooney in Euro 2004 against Portugal in the Quarter-final stages. This was a new experience to the young English star so therefore he put in a lot of effort when it was not needed like chasing down lost causes. ...read more.

Achievement motivation can be directly linked to a sportsman or woman's personality. Someone who is an extrovert would be considered to be high in nAch, whereas someone who is an introvert would be considered to be high in naF. Top-level performers who are high in nAch are people like Thierry Henry and Zinadeine Zidane as they both play up to the crowds and like to show off their talent to extremes. Whereas performers such as Paula Radcliff in the 2004 Olympics are high in naF as she would rather pull out and avoid failure than finish not first. To be a successful sports performer and perform to a high standard in every competition or event, motivation needs to be at an optimum level every time. Motivation is a defining and prominent role in sports psychology and will continue to be for years to come. Theorists, scientists and other experts in this field will continue to conjure up theories that will challenge the last one invented. Motivation s not just used in the sporting world, people are motivating themselves everyday to do very simple day-to-day jobs and will continue to do so. Each person has there own unique way of arousing and motivating themselves and no matter how many times somebody tries to categories this, it will never be 100% accurate. Jonathan Cox ...read more.