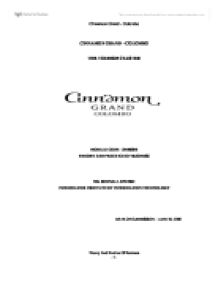 CINNAMON GRAND - COLOMBO THE TOURISM CLUSTER MODULE CODE - 3MBS450 THEORY AND PRACTICE OF BUSINESS MS. SHONALI APONSO INFORMATICS INSTITUTE OF INFORMATION TECHNOLOGY DATE OF SUBMISSION - JUNE 30, 2008 TABLE OF CONTENTS Acknowledgement......... * Dear Ms. Shonali Aponso, we would like to pay our heartiest gratefulness initially for guiding us towards the Business world. You were always there for us when we were working on this assignment. Thank you very much for your kind contribution to make this project a success. * Our dear friends, who gave us a helping, hand in every possible way. Your assistance gave us courage to finish this assignment appropriately, thank you very much for all your support. * We would like to pay our gratitude to our dear parents, who were behind us to succeed in this endeavour. * And finally we would like to thank all IIT staff for their contribution to make this assignment a success. THE EXECUTIVE SUMMARY The Tourism Cluster was formed by key tourism industry associations in April 2000 together with the U.S. Agency for International Development (USAID) funded The Competitiveness Initiative (TCI). Their main objective is getting the tourism industry to adopt new strategies in addition to the conventional "Sun, Sea and Sand concept", in order to increase the level of competition of Sri Lankan tourism industry and to introduce unique selling points. As a recognized five star tourist hotel, Cinnamon grand situated in the heart of Colombo represents a modern hotel vibrant ion colour, indulgent in hospitality, and committed to satisfy customer needs. Cinnamon grand hotel guarantees legendary Sri Lankan hospitality through luxury, comfort, creativity and discovery. The location of Cinnamon grand, experienced staff,its Technological advancements, and excellent business purpose environment has contributed a great deal to the success of the hotel. In compliance with the strategies designed by the tourism cluster Cinnamon grand can improve their competitiveness in the industry. ...read more.

* Health issues in Asian Countries The impact of health issues in Asian countries has also been a bigger concern for the tourists. Diseases like SARS and Bird flue affect the tourist arrivals to Asia in recent past. Tuberculosis in Sri Lanka has major concern by western tourist. A plane to reduce tuberculosis in this country is already started by the government. * Aging Population The world has increasingly a high proportion of aging population due to awareness in health care and the decrease in birth rate. This lead to the interest of aging people important in the hospitality industry. But most of the Sri Lanka visitors are between the 29 to 39 years of age, so the industry have a strong view over this age group interests in packaging the hotel services. Technological Environment * Online Reservation facilities The technological improvement in the IT sector has enabled the hotel industry players to provide more fluent service to its customers. The graph from annexure shows that more information gathering is done through internet. The simple procedures of online booking systems have given the consumers a better service availability. Nowadays the online payment methods will be more popular than the other methods. The Cinnamon Grand maintained its own online booking system with latest web based technology. * Virtual Tours The virtual tours through web sites have influenced the tourism industry in positive way which has increased the tourist arrivals of eastern countries. The technology used in virtual tours can be improved in future and tourists will be given more variations to choose from. The competition among the hotels will increase because of this. * The Nature of investment available in Technology There is a plenty of opportunity in MICE tourism (Meetings, Incentive Travel, Conference and Exhibitions). The MICE traveller in any event spends 4-5 times over average holiday maker. But this segment in Sri Lanka has fallen behind countries like Singapore, Malaysia and Hong Kong. ...read more.

A state of emergency is in effect throughout the country. As a result, there is a heightened security force presence, including checkpoints, throughout the country. Travellers are advised to carry personal identification at all times and comply with government and security force instructions. Available at: http://www.voyage.gc.ca/dest/report-en.asp?country=276000 [Online] [Accessed 22 June 2008] Travel Warning United States Department of State Bureau of Consular Affairs Washington, DC 20520 This information is current as of today, Tue Jun 24 2008 22:36:58 GMT+0530 (Sri Lanka Standard Time). SRI LANKA June 13, 2008 This Travel Warning provides updated security information and alerts American citizens traveling to or living in Sri Lanka about the continuing danger of terrorist attacks throughout the country. This supersedes the Travel Warning for Sri Lanka dated February 8, 2008. The Department of State urges American citizens to evaluate carefully the risks of travel to Sri Lanka and specifically warns Americans against travel to northern and eastern areas of Sri Lanka. Since early January 2008, fighting between the Sri Lankan military, paramilitary groups and the Liberation Tigers of Tamil Eelam (LTTE) has increased, and b**b explosions in densely populated areas have killed dozens of civilians, including in some areas frequented by foreign tourists. Although there is no specific indication that American citizens or institutions have been targeted, there is a heightened risk of American citizens becoming victims of violence just by being in the wrong place at the wrong time. American citizens who decide to travel to Sri Lanka despite this Travel Warning should be aware of their personal surroundings and follow prudent security practices. Americans should avoid large crowds and public gatherings and should particularly avoid political rallies, military bases, and government and military vehicle convoys, which are frequent targets of LTTE attacks. Americans are also strongly advised against using public transportation in Sri Lanka, as civilian buses and trains have increasingly been the targets of terrorist b**b attacks in recent months. U.S. Government personnel are currently prohibited from using these modes of transportation. Available at: http://travel.state.gov/travel/cis_pa_tw/tw/tw_3011. ...read more.