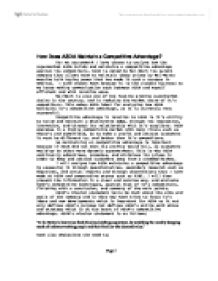 How Does ASDA Maintain a Competitive Advantage?

How Does ASDA Maintain a Competitive Advantage? For my coursework I have chosen to analyze how the supermarket ASDA builds and maintains a competitive advantage against its competitors. ASDA is owned by Wal-Mart its parent company that allows ASDA to maintain cheap prices by Wal-Marts massive bulk buying power that has made it such a success in America. I have chosen ASDA because it is the closest business to my house making communication each between ASDA and myself efficient and with relative ease. Wal-Mart is also one of the fasting growing supermarket chains in the country, and is reducing the market share of it's competitors. This makes ASDA ideal for analysing how ASDA maintains it's competitive advantage, as it is currently very successful. Competitive advantage in relation to ASDA is it's ability to build and maintain a distinctive edge, through its reputation, innovation, and through its relationship with it's suppliers. ASDA operates in a highly competitive market with many rivals such as Tesco's and Somerfield, so to make a profit and attract customers it must be different to, and better than it's competitors. So maintaining an competitive advantage is important because if ASDA did not then its profits would fall, as customers would go to other more dynamic supermarkets. ...read more.

By offering this service we maintain our standing as one of Bretons top retailers!' ASDA's use of the internet is definitely proved useful, although in a survey I conducted only 1 in 10 used this service it was conducted in Wisbech where this service is not available ASDA maintains that it's internet site has 'many users' and is 'growing in popularity all the time.' Tesco's and a few other supermarkets offer a similar service, but ASDA was one of the market leaders, and offers it at the lowest cost rate than other competitors, attracting customers away from more expensive websites. ASDA also offers other banking and useful services such as Pet Insurance and ASDA calltime which have proved most popular with ASDA and other supermarkets such as Sainsbury's. Although ASDA was one of the companies that pioneered this other companies such as Somerfield have followed suit proving that it is indeed popular and gave ASDA a competitive advantage while other companies had to reactively start their own up. The internet is also a cost efficient and effective way of advertising which ASDA utilizes on it's website to make money, and to show it's promotions online, which was an advantage which some supermarkets were slow to utilize like the Co-operative Supermarket Chain Rainbow. ...read more.

This is used in conjunction with other marketing 'gimmicks' such as 'linksaves' where you 'buy one get one free' which have proved very successful for all the supermarkets who use it and helps to get rid of excess stock, or stock that is not selling well. Like most businesses ASDA has to rely on it's ability to continually innovate, build up and maintain a reputation, and forge new and better relationships with it's customers and suppliers for it to have a competitive advantage. ASDA does all three of these and well as is it one of the top retailers in this country and is also one of the fastest expanding, showing that ASDA is indeed successful, due to it's low prices and high levels of customer care, ASDA is one most innovative supermarket chains, and is always developing better ideas, and giving the consumer what it wants, by doing this it maintains a competitive edge and although other companies are doing the same and copying from each other, by continually striving for better quality and lower prices it will continue to attract customers, and therefore maintain it's main and hard to copy competitive edge. Page 1 ...read more.