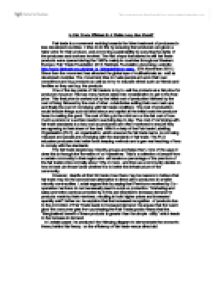 Is Fair Trade Efficient & A Viable Long-Run Model? Fair trade is a movement working towards the fairer treatment of producers in less developed countries. It tries to do this by ensuring that producers are given a fairer price for their produce, and promoting sustainability by securing the rights of the producers and workers involved. The first shops that started to sell fair trade products were opened during the 1990's mainly in countries throughout Western Europe.( Fair Trade Foundation 2010 Fairtrade Foundation chronology website: http://www.fairtrade.org.uk/what_is_fairtrade/history.aspx. 27th November 2010 ) Since then the movement has attracted the global eye of multinationals as well as developed countries. The movement tries to make people act upon their own conscience and buy products as well as to try to educate others such as friends and families so they can buy the products. One of the key points of fair trade is to try to sell the products at a fair price for producers however; this has many factors taken into consideration to get to the final price. This final price is worked out by the initial cost of production followed by the cost of living followed by the cost of other subsidiaries adding their own mark ups and finally the cost of complying with fair trade conditions. ...read more.

How ever in the real world, third world producers have no leisure time and would not give up work for leisure as a result of this they would work regardless of getting a subsidy with out having to work and this would result in the over production and over saturating the market. (Leclair 2002 fighting the tide page 7) Mark Hayes disagreed with Leclair's findings based on the assumptions how he defines a subsidy. Hayes says that the premium price a consumer pays which is the extra higher price a supermarket charges for a bag of fair trade coffee compared to its standard coffee is what is defined as a subsidy. The consumer knows that they are able to get it cheaper but regardless are willing to pay that extra higher price knowing that it will go back to the producer in the form of a fairer price. Further more he argued that in the third world people would not use the substitution affect and only the income affect. Even if they were, better off and had more leisure time they would use that leisure time to work. From the above we can begin to conclude what fair trade is about and whether it is a viable long run method and whether or not it is efficient. ...read more.

Due to this over production factor, the quality of the goods over the long run again may be compromised. Fair trade farmers know they will get a minimum price and due to this, intervention and security may not produce goods to the highest quality. Before they entered the fair trade agreement quality is all that would differentiate them from other producer's better quality would mean better prices but the guarantee of minimum prices could demolish the quality factor. As stated above fair trade is a not on a major scale yet in terms of its popularity it maybe but in terms of the help it can offer to those that it need it, it is not. The lack of diversification of products because of the terms of fair trade questions the existence of the goods its producers produce. the fair trade name over time has been loosing the meaning it set out to create initially multinationals are miss using the name, and fair trade not questioning them or taking action against them knowing full well what they are doing shows that fair trade as an organisation is loosing its value it set out. By picking small minorities, it is segregating others and making it harder for those who are not part of it, which in it self proves the efficiency, and the existence of it in the end. ...read more.