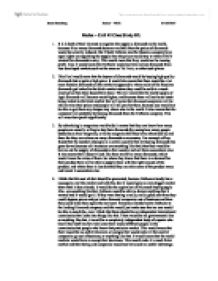 It is in both of their interests to regulate the supply o diamonds to the world, because if too many diamonds became available then the prices of diamonds would be severely reduced. But if both DeBeers and the Russian company

Busies - Unit 42 Case Study B2. 1. It is in both of their interests to regulate the supply o diamonds to the world, because if too many diamonds became available then the prices of diamonds would be severely reduced. But if both DeBeers and the Russian company have equal rights on regulating the supply then the prices would stay at where THEY wanted the diamonds to stay. This would mean that they would not be loosing profit. Also it would mean that DeBeers would not have to buy diamonds from less developed markets such as the ones on Tel Aviv, or other such places. 2. This Deal would mean that the buyers of diamonds would be buying high quality diamonds but at quite a high price. ...read more.

This will raise their profit significantly. 3. By advertising in magazines worldwide it means that they can know how many people are actually willing to buy their diamonds (by seeing how many people subscribe to their magazine, or to the magazine that they have advertised in) and there for they can release as many diamonds as necessary. For example of hey found that the number of people in a certain country that are buying diamonds has gone down (because of a recession or something like that) then they would be bale to cut the supply of diamonds to that country and sell them somewhere else. It also means that it doesn't look like there are far to many diamonds, which would lower the value of them. ...read more.

Everyone already knows DeBeers as the leading Diamond company and this would just make sure that no one would be able to touch the, ever. I think that there should be an independent international commission that looks into things like this. There would be no governmental ties or anything like that, it would be a completely independent body of experts who know their stuff. So for every case there would different people in the commission but people who know that particular market. This would mean that there would be no unfair takeovers or merges that would make all the smaller companies go out of business, or anything like that. It would mean that the world markets would have to accept their decisions. This would make it a much fairer market and that the big old companies would not have such an unfair advantage. James Sandberg Busies - PJOS 01/05/2007 ...read more.