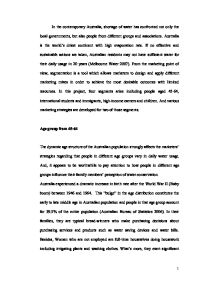 Marketing strategy for water conservation in Australia. The dynamic age structure of the Australian population strongly affects the marketers strategies regarding that people in different age groups vary in daily water usage.

In the contemporary Australia, shortage of water has confronted not only the local governments, but also people from different groups and associations. Australia is the world's driest continent with high evaporation rate. If no effective and sustainable actions are taken, Australian residents may not have sufficient water for their daily usage in 20 years (Melbourne Water 2007). From the marketing point of view, segmentation is a tool which allows marketers to design and apply different marketing mixes in order to achieve the most desirable outcomes with limited resources. In this project, four segments arise including people aged 45-64, international students and immigrants, high-income earners and children. And various marketing strategies are developed for two of those segments. Age group from 45-64 The dynamic age structure of the Australian population strongly affects the marketers' strategies regarding that people in different age groups vary in daily water usage. And, it appears to be worthwhile to pay attention to how people in different age groups influence their family members' perception of water conservation. Australia experienced a dramatic increase in birth rate after the World War II (Baby boom) between 1946 and 1964. This "bulge" in the age distribution constitutes the early to late middle age in Australian population and people in that age group account for 39.3% of the entire population (Australian Bureau of Statistics 2006). ...read more.

The economic environment consists of factors that affect consumer buying power and spending patterns. The Australian economy, in particular, has grown strongly in the past twenty years, resulting in more Australians having experienced increased living standards, and this is reflected in their lifestyles (Kotler ,et al,2006). Despite the fluctuations in economic conditions during this period, incomes have risen in many important segments. The baby-boom generation is moving into its prime wage-earning years, the number of small families headed by dual-career couple is increasing and more people are reluctant to get married at an early age. These factors create more people in upper socioeconomic class. Marketers must pay attention to those upper socioeconomic class consumers, whose spending patterns are less affected by current economic events. High-income earners are becoming more numerous, while at the other end of spectrum lower-income-earning households are becoming less numerous (households with incomes below the third deciles of $29968 per annum). Therefore, the high-income group really should be considered in terms of water usage (Kotler ,et al,2006). Children Children aged below 14 are another segment to focus on. A statistic conducted in 2004 reveals that there are approximately 1,323,995 residents in this age group and is account for 19.7 per cent of the Australian population (total of 6,720,791) (Australian Bureau of Statistics 2006). Due to innocent nature, children are quick learners. They can easily influenced by the living environment (John et al, 2001 p133). ...read more.