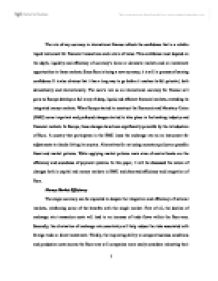 The role of any currency in international finance reflects the confidence that is a reliable liquid instrument for financial transactions and a store of value. This confidence must depend on the depth, liquidity and efficiency of currency's home or domestic markets and on investment opportunities in those markets. Since Euro is being a new currency, it is still in process of earning confidence. It is also obvious that it has a long way to go before it reaches its full potential, both domestically and internationally. The euro's role as an international currency for finance will grow as Europe develops a full array of deep, liquid, and efficient financial markets, extending its integrated money markets. When Europe started to construct the Economic and Monetary Union (EMU) some important and profound changes started to take place in the banking industry and financial markets. In Europe, these changes have been significantly powerful by the introduction of Euro. A country that participates in the EMU loses the exchange rate as an instrument for adjustments to shocks hitting its country. Alternatives for not using monetary policy are possible fiscal and market policies. While applying market policies main aims of central banks are the efficiency and soundness of payment systems. ...read more.

In the past 18 months, banks have effectively formed a two-sided system that larger institutions control the cross-border flow of liquidity and smaller institutions play a more restricted national role. Before this system occurred, large national banks were already making international transactions, while smaller ones were doing business transaction nationally. However, banks were generally not aware of the creditworthiness of the smaller banks in other countries. But it is clear that this situation puts the largest banks at an advantage. While performing an important function in distributing liquidity, they are able to profit from arbitrage opportunities, because liquidity shortages cause interest rate differentials between the EMU participant countries. So that the definition of financial market integration should include the possibility of cross-border transactions and investors' willingness to enter into such transaction. At first, the creation of a single currency and a single monetary policy was foreseen as a natural continuation of the birth of the single market which will make the freedom of movement of goods, services, labor and capital easier. But then, it turned into the single currency that helped the adjustments to the economy, economic policy and the adaptation of institutions. The introduction of the single monetary policy at the beginning of last year and converting to the Euro was a huge institutional and economic step. ...read more.

In addition to the integration of the Euro, the need of limiting credits could be applied to the developments in the repo market. Integration in the repo market has improved since the introduction of the Euro. To achieve a greater harmonization across the Euro-zone needs a deeper intervention and significant commitment by national authorities. The hierarchy for general collateral rates is among the factors pointing to a low degree of integration. Differences in the yields of the underlying bonds can mainly be positioned to different degree of liquidity. Swaps against foreign currencies: Activity decreased in all maturities. the most important reason for this development is the disappearance of cross-currency trade among EMU participants. Though, turnover in currency swaps is about 23% of total market turnover. This amount is comparable in size to the repo market. A substantial share of currency swap transactions was cross-border. CONCLUSION: To sum up, the ECB has done a good job about liquidity management in the Euro-area. Its distribution of liquidity is an efficient work. In addition to this, the ECB is succeeding in conducting a single monetary policy. This is reflected in the equal costs of liquidity throughout the Euro-zone. The degree of integration differs among various segments of Euro money market. The unsecured market has quickly become highly integrated, while, the repo market remains domestically oriented. ...read more.