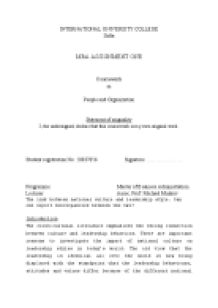 The link between national culture and leadership style. Can one expect discrepancies between the two?

﻿INTERNATIONAL UNIVERSITY COLLEGE Sofia MBA ASSIGNMENT ONE Coursework in People and Organization Statement of originality I, the undersigned, declare that this coursework is my own original work. Student registration No: 20037056 Signature: ???????. Programme: Master of Business Administration Lecturer: Assoc. Prof. Michael Minkov The link between national culture and leadership style. Can one expect discrepancies between the two? Introduction The cross-cultural literature emphasizes the strong connection between culture and leadership behaviors. There are important reasons to investigate the impact of national culture on leadership styles in today?s world. The old view that the leadership is identical all over the world is now being displaced with the standpoint that the leadership behaviours, attitudes and values differ because of the different national cultures (Boyacigiller and Adler, 1991; Hofstede, 1980). Many researchers assert that the style and effectiveness of the leaders vary vastly as a result of the cultural forces in which leaders work. While some scientists maintain the thesis that universal leadership behaviour exists (Bass and Avolio, 1993; Dorfman and Ronen, 1991), other asserts that unique cultural characteristics such as language, religion and values determine different leadership styles in different societies (Hofstede, 1993, Ronen and Shenkar, 1985, Triandis, 1993). In the same time some scholars give evidence for the validity of both of the two theories (Dorfman, 1997, Bass, 1990). National culture The purpose of this paper is to show whether the leadership style is determined by the national culture in some aspect. To show this relation firstly we have to clarify the meaning of these terms - leadership style and national culture. One of the most prominent researchers in the field of culture is Geert Hofstede. According to him ?culture is the collective programming of the mind, which distinguishes the members of one human group from another? (Hofstede, 2004). Another researcher in this field is Robert House. He describes culture for his GLOBE research project as follow: ?Shared motives, values, beliefs, identities and interpretations or meanings of significant events that result from common experiences of members of collectives and are transmitted across age generations? (House, 2002). ...read more.

He achieves this purpose with his dimensions which are specially adjusted to explore the effect of culture over leadership. Leadership and leadership styles Leadership is one of the most important aspects of our life. If you are a good leader you will have better relationships with the others because to be a good leader means that you can communicate efficiently with many different people. Leadership doesn?t have only one definition. It has many different forms. Many scholars have been researched the topic of leadership. According to Yukl, leadership is the process of interaction between the leader and the other stuff, influencing them toward workplace goals achievement (Yukl, 1998). According to Gerstner and Day, the most important characteristic of the leader from the view of the followers is that the leader has to be perceived as a role model of the group (Gerstner and Day, 1994). Because leadership has a lot of different forms, a good way to analyze leadership is to use the four approaches which Yukl has been conducted in his researches (Yukl, 1989). These approaches are as follow: 1. Power-influence approach: Power-influence approach is focusing on the power which the leader has and the way he uses that power. This power can be viewed as the influence which the leader has over attitudes and behaviours of the followers. According to Yukl, one of the most important questions is how a leader exercises his power. The way in which this power is exercised often explains how the subordinates react to the power (Yukl, 1989). 2. Behaviour approach: The behaviour approach focuses more on what people perceive as ?what leaders really do on the job? (Yukl, 1989). This approach is connected closely to the question what really is the job of the manager. When we are talking about leadership, one of the main questions is which behaviour leads to effective leadership. According to Yukl, there are two different types of behaviours which lead to effective leadership: relationship-oriented behaviour and task-oriented behaviour. ...read more.