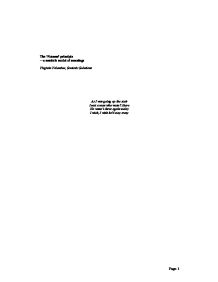 The 'Notness' principle - a semiotic model of meanings

The 'Notness' principle -a semiotic model of meanings Virginia Valentine, Semiotic Solutions As I was going up the stair I met a man who wasn't there He wasn't there again today I wish, I wish he'd stay away Thinking Notness-where we start I think, therefore I am Ren� Descartes I think where I am not Jacques Lacan Descartes' famous dictum encouraged us to perceive ourselves as 'centred' subjects-men and women who see and understand other objects from a firm and fixed position at the centre of our world. And that is how we still imagine consumer understanding of brands and the interpretation of marketing messages. Semiotic thought challenges this whole notion by suggesting that the real understanding of anything comes from knowing what it is not, rather than what it is. We know about clean, only because we know about dirty. We can understand the concept of 'processed' food because we have a framework of 'fresh', ie not subject to the processes of cooking and/or preservation. So, instead of being at the centre of a stable world, we are continually moving between presence and absence, defining what a thing is by its oppositional not-ness. And we have been doing it all our lives. When we are small and acquire language, we start to understand the world around us by splitting it into pairs of opposites MUMMY is NOT DADDY HELLO is NOT GOODBYE HUNGRY is NOT FULLUP NOISE is NOT QUIET (and vice versa) And the one all kids find the most difficult to learn NO is NOT YES What we are actually doing is defining reality in terms of oppositions. One part of the opposition is 'present' to our conscious minds-and the other is 'absent', present only in the unconscious. Overt oppositions Some oppositions are very obvious and overtly used in brand marketing. Let's take the clean/dirty opposition at the heart of soaps and detergents. ...read more.

all cultures try to account for apparent contradictions in the world around them by making myths (b) in almost all languages- whether 'primitive' or 'sophisticated'-myths follow similar structural lines in dramatising these contradictions into story form, in order to resolve them. Successful brands resolve contradictions by creating myths Translating this definition into modern marketing language means that a brand's myth is the belief by consumers that the brand offers them a way of resolving a problem or situation that hitherto represented some kind of contradiction. Or, from the perspective of the marketer, that the brand holds the power to reconcile a cultural opposition. For a simple example of this definition of brand myth, we might look again at Persil. Here, the brand reconciles the cultural opposition between the 'efficiency' and detachment of a factory-produced, high-tech scientific washing agent on the one hand, and the 'caring' of a nurturing mother-figure on the other From this contradiction, we could define the Persil myth by an expression such as caring efficiency which became embodied in the mythic figure of 'The Persil Mum'. Our own practical experience, working in semiotic analysis, indicates that brand myth-the power to resolve contradictions in this way-is not just an attribute of one or two unusually outstanding, or apparently 'magical' brands. Virtually every consistently successful brand today embodies its own particular myth. The more contradiction the better The power of the brand myth seems to stand in direct proportion to the dynamism of the contradiction it resolves: ie the stronger the oppositions, the stronger the myth-and, consequently, the stronger the brand positioning. It thus follows that the weaker the opposition (which often erodes over time, as a result of socio-cultural change or the growth of new technologies) then the weaker the myth - and, consequently, the weaker the brand in the marketplace. We find this to be borne out in practice. Companies with 'ailing', 'declining' or 'dying' brands are often companies (from a semiotic perspective) ...read more.

But it goes even deeper than that. Statistics show that pinpointing the location of the speaker is the opening gambit of most mobile conversations. From the ubiquitous "Hello, I'm on the train" to the habit of young people everywhere to ask of each other "Where are you". The psychological neighbourhood is network-wide. And Small Talk has, in fact, now got its own language-text-messaging. Phatic, designed for chat and for informality and, above all, simply for keeping in touch (with or without purpose-who cares!) txt is the new lol ; ) IYKWIM. People Like Us/People Like Them -a word about notness in cross-cultural research Consumers use the principle of notness to group themselves spontaneously into communities, These groupings we describe as 'People Like Us', but really we are defining ourselves as 'NOT People Like Them. Importantly the boundary between them and us is symbolically signposted. In other words we are much clearer about who it is we are not, what it is we don't approve of, the styles we don't like and the ethos we don't want to be part of than we are about what it is we do like. If we apply this principle to research we can see that finding a common 'enemy' may produce a much more powerful global market driver than trying to find common ground. In the detergent market the common enemy is dirt and disorder, although attitudes and beliefs about what constitutes cleanliness may differ widely. Young people across the world are brought together in badging and styles that unites them in their differentiation from other groups. The anthropologist Anthony Cohen describes the importance of researching the place of products or brands at the boundaries of culture, rather than in the middle people become aware of their culture when they stand at its boundaries, when they encounter other cultures, or when they become aware of other ways of doing things. Or, as a teenager in a focus group once said to me "You recognise it by its not, not by its yes" I couldn't have put it better myself. ...read more.