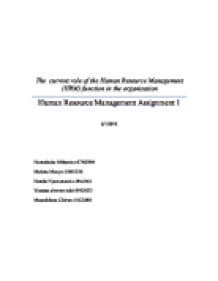 The Role Of Human Resource Management. Theories and Case Study of HRM at Nandos Restaurant.

The current role of the Human Resource Management (HRM) function in the organization Human Resource Management Assignment 1 5/1/2012 Nontuthuko Mthembu-07M2984 Mutinta Mooya-10M1256 Natalie Nyamutumbu-09n3461 Vanessa siwawa-ndai-09S3822 Musankhana Chirwa-10C3888 Introduction The role of Human Resource Management in an organisation is one that has been critically evaluated over the years; as the expectations, values and needs of employees have been changing and Nandos is no exception to the rule. The purpose of our research was to establish whether the HRM function in the organisation was fulfilling its objectives in creating an environment conducive for engaging employees and challenging them to perform in alignment with the organisations' strategy. The most important factor to bear in mind is that the fast food industry is cut-throat and the two keys success factors we would like to highlight relating to human capital are speed and efficiency. This obviously has a direct implication in the manner in which the managers will then choose to undertake the role of HRM to address the issues. The report begins with the literature review discussing the different theories on the role HRM could adopt. Followed by the methodology highlighting the process we went through in obtaining the relevant information. We will then present our findings which we will critically evaluate as well as consider the limitations of the research. And last but not least we will then give our recommendations on the basis of our findings. Literature Review The following 6 models will be discussed in more detail-Nadler and Tushman, Ulrich, Perspective, Kearns, Storey, and 8S Models Nadler and Tushman Model: According to Nadler and Tushman (1977), This is the model for diagnosing organisational behaviour: applying a congruence perspective to organisations What Nadler and Tushman stated is that for an organisation to get work done, it relies on the people that work for the organisation, individually or collectively which they do on their own or collaboration with technology. ...read more.

Therefore, this results in strategy being formulated as the organisation progresses. Lastly there is systemic approach which puts emphases on social factors, demographic composition and national culture in which the organisation is operating (Legge, 1995). Whittington's (1993) generic perspective on strategy Research Methodology We went to the Nandos branch in Grahamstown and conducted a face to face interview with Mr Khaya the branch manager. He answered questions from a survey based on the Ulrich Model; we chose this model for its simplicity to construct a vivid illustration of the current role of HRM as well as its practicality. It allowed us to diagnose which areas the organisation is strong in and which ones needed improvement and those that were completely lacking. From there we took the results from the survey, then looked at the various components of the Nadler and Tushman model and compared and contrasted to be able to gain a deeper context of whether there was congruence the HRM function within the organisation. Being in the store also gave us an opportunity to observe the relationships and the hierarchy of authority and just generally the ambience in the store. Findings Nando's International is an international food franchise organization that was started in 1987 from the successful Nando's brand in South Africa to take advantage of the opportunities offered by taking the brand international. In 1995, the company had grown to 45 outlets in South Africa with additional 17 in other southern African countries, Namibia, Botswana, Zimbabwe and Swaziland, (Nando's: 2012). From our findings and research, we found that Nando's International does not yet have a formal HR strategy although key elements of such a strategy are present. The lack of HR strategy is a product of the recent history of Nando's International global expansion, the nature of the industry and the franchise relationship. Each country can interpret their own strategy judging from their own local conditions. ...read more.

The Formal organisation impacts on the management of the firm's infrastructure, this helps in building an efficient infrastructure by reengineering organisation processes. Nandos has an efficient infrastructure that helps individuals perform as the tasks they are required to. Lastly the Informal organisation impacts on the management of transformation and change, this is because the actions of change agents include identifying and framing problems, building relationships of trust, solving problems and creating and fulfilling actions plans. Nandos HR professionals will need to understand critical processes for change build commitment to those processes and ensure that change occurs as intended. Limitations * Nandos Grahamstown is a small branch and therefore the HRM function will not be as visible as other functions. * The sample size of employees is limited; therefore we cannot observe the entire scope of the role of HRM as compared to other larger companies. * The role of HRM across Nandos branches is not standardised as each manager adopts its own role, therefore it may be difficult to see the net effect as one cannot compare. Recommendations * The branch Manager, Mr Khaya should ensure continuous training of his staff to ensure low staff turnover. * He should ensure the Performance Management System is appropriate for their situation and is able to deal with all the branch issues. * The branch is small enough to ensure that people feel valued through endeavours such as employee of the month. * It is easier to enrich the employees jobs as they can rotate more often and learn all the tasks to be done in the restaurant thereby enhancing their skills with on the job training and ensuring that a pool of skilled employees are available if one falls sick. Counteracts the effects of absent employees as well. * They can also move from being employee champions to administrative experts or change agents as in the modern world infrastructure and change is what is very important in most organisations. ...read more.