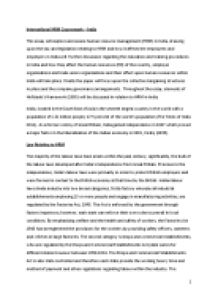 This essay will explore and assess human resource management (HRM) in India, drawing upon the law and legislation relating to HRM and how it affects the employees and employers in India

﻿International HRM Coursework ? India This essay will explore and assess human resource management (HRM) in India, drawing upon the law and legislation relating to HRM and how it affects the employees and employers in India will. Further discussion regarding the education and training procedures in India and how they affect the human resources (HR) of the country, employer organisations and trade union organisations and their effect upon human resources within India will take place. Finally the paper will focus upon the collective bargaining structures in place and the company governance arrangements. Throughout the essay, elements of Hofstede?s framework (1980) will be discussed in relation to HRM in India. India, located in the South East of Asia is the seventh largest country in the world with a population of 1.21 billion people; 17.5 percent of the world?s population (The Times of India 2011). As a former colony of Great Britain, India gained independence in 1947 which proved a major factor in the liberalisation of the Indian economy in 1991, Koshy (1995). Law Relating to HRM The majority of the labour laws have arisen within the past century, significantly, the bulk of the labour laws developed after India?s independence from Great Britain. Previous to the independence, India?s labour laws were primarily in order to protect British employers and were formed in context to the British economy at that time by the British. Indian labour laws divide industry into two broad categories, firstly factory whereby all industrial establishments employing 10 or more people and engage in manufacturing activities, are regulated by the Factories Act, 1948. This Act is enforced by the government through factory inspectors; however, each state can enforce their own rules to prevail in local conditions. ...read more.

Employer Organisations Initially, there are two apex employer organisations, namely the All India Organisation of Employers (AIOE) and the Employers Federation of India (EFI), which come under the umbrella of Council of Indian Employers (CIE). The Council of Indian Employers is not registered under any Act of the country, but the two constituents of the CIE are registered. CIE?s mission is to interact with the Indian Government to formulate long-term labour, economic and social welfare policies in relation to labour (http://www.ioe-emp.org/en/member-federations/index.html?tx_gsifeuserlist_pi1[showUid]=65) [Accessed 20 April 2011]. In order to meet these goals, the CIE embraces mutual cooperation amongst workers? organisations and the employers within the country. Being the seventh largest country in the world, India?s use of regular meetings with the central trade union of workers are held, helping to understand the viewpoints of the employers and employees and enabling them to have a voice, in the vast labour market. EFI was established in 1933 with the purpose of protecting and promoting the interests of employers. The EFI has kept up-to-date with the changing business environment in India, such as the changes that occurred during the independence from Great Britain and in 1991 with the liberalisation of the economy. The Federation represents the employers? concerns and views at various committee meetings at both state and national level, informing at a higher level the concerns of employees and employers in companies within India, http://www.efionline.in/the_institution.html [Accessed 20 April 2011]. As well as engaging with employers throughout India, the EFI also engages with the Chamber of Commerce and creates a pro-active policy environment supporting the industry effectively by including various points of view from various sources. ...read more.

Employer organisations within India have helped to formulate policies in relation to labour, economic and social welfare. They helped to form a bond between the workers organisations and the employers within the country, enabling clear and easy communication between the two groups. The EFI supports HRM in India, maintaining a peaceful environment in which to disclose problems enabling sound interaction between workers and their organisations to which they belong decreasing the need for trade union powers to be used. Mahatma Gandhi in the 1920?s developed the first collective bargaining agreement to settle disputes between employees and employers. The Industrial Disputes Act 1947 was passed which provides for the investigation of disputes, benefitting both employee and employer. The use of collective bargaining has improved the job security for many employees as they believe that disputes can be settled with their employers without being dismissed straight away, with the backing of the state and government. This will help firms compete successfully on the international market as the security of jobs will enhance productivity as labour turnover decreases. Historical and cultural developments within India have affected the company governance of the country, although laws surrounding the issue are sound, the implementation of them are to be desired. Although India benefits from a code on corporate governance, the guidelines are there to be interpreted by the employees and employers which due to various languages spoken in the various regions of India may be interpreted differently. Corporate governance offers advice regarding the relationships of shareholders within the business; however, the large family run businesses in India corroborate with the traditional values which are inherently implanted in the activities of the owners. In order to compete and trade internationally, firms in India will have to ensure they accommodate the differences with other countries and their cultures regarding the family and collectivism. ...read more.