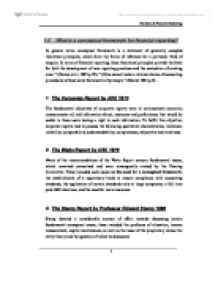 1.0 What is a conceptual framework for financial reporting? In general terms conceptual framework is a statement of generally accepted theoretical principles, which form the frame of reference for a particular field of enquiry. In terms of financial reporting, these theoretical principles provide the basis for both the development of new reporting practices and the evaluation of existing ones. " (Davies et al. 1993 p.20). " (O)ne cannot make a rational choice of accounting procedures without some framework of principle " (Macve 1981 p.9) . 1. The Corporate Report by ASC 1975 The fundamental objectives of corporate reports were to communicate economic measurements of, and information about, resources and performance that would be useful to those users having a right to such information. To fulfill this objective, corporate reports had to possess the following qualitative characteristics; relevance, reliability, comparability, understandability, completeness, objectivity and timeliness. 2. The Watts Report by ASC 1978 Many of the recommendations of the Watts Report concern fundamental issues, which remained unresolved and were consequently revised by the Dearing Committee. These included such issues as the need for a conceptual framework; the establishment of a supervisory body to ensure compliance with accounting standards; the application of certain standards only to large companies; a full time paid ASC chairman; and the need for more resources. 3. The Stamp Report by Professor Edward Stamp 1980 Stamp devoted a considerable amount of effort towards discussing certain fundamental conceptual issues, these included the problems of allocation, income measurement, capital maintenance, as well as the issue of the proprietary versus the entity theory and the question of which he discussed. ...read more.

However, the question is whether it is really feasible for enterprises to do so in practice and, if it were, what this information would comprise. A familiar list of possible users is also identified, comprising investors, employees, lenders, suppliers and other creditors, customers, government and their agencies and the Public. However, when we narrow down the chapter the focus by saying that all users 'have some interest in the financial position, performance and financial adaptability of the enterprise as a whole, financial statements that meet the needs of providers of risk capital to the enterprise will also meet most of the needs of other users that financial statements can satisfy.' In essence, therefore, the investor's perspective is chosen as the one most likely to be useful in the preparation of what will remain general-purpose financial statements. Having established this generalization, the chapter then goes on to assert that ' the economic decisions that are taken by users of financial statements require an evaluation of the enterprise's ability to generate cash and the timing and certainty of its generation', and that the' evaluation of the ability to generate cash is assisted by focusing on the enterprise's financial position, performance and cash flows and using these in predicting expected cash flows and assessing financial adaptability. Financial adaptability is described as consisting of ' the ability of an enterprise to take effective action to alter the amount ability and timing of its cash flows so that it can respond to unexpected events and opportunities. ...read more.

and liabilities set out in Chapter 4; * FRS 11 'Impairment of Fixed Assets and Goodwill' uses the recoverable amount notion described in Chapter 6; and * FRS 3 'Reporting Financial Performance' draws on the principles of good presentation described in Chapter 7. So how close is the Statement to existing practice? It is probably true that, compared with existing practice, parts of the Statement sound unfamiliar. That is not surprising because the Statement is a description of fairly high-level principles, not detailed accounting practice. Putting that aside, the Statement actually bears quite a close resemblance too much of existing practice. It should do so, because that is what it was derived from. There are some differences, of course, as one would expect from a document that provides guidance to the standard-setting process-a process that is intended to result in changes to practice. Perhaps the most noteworthy difference concerns the slightly more restricted role that the Statement gives to the notion of matching. The effect of this is that items of expenditure and losses that, though not having economic benefits still to be derived from them, might be carried forward on the balance sheet under existing practice would, under the model described in the Statement, be recognized as losses in the profit and loss account. The ASB does not believe that differences between the Statement and existing practice are a cause for concern. The standards published to date have been based on the principles in the Statement and have found general acceptance, and there is no reason to believe that this will change. 5. ...read more.