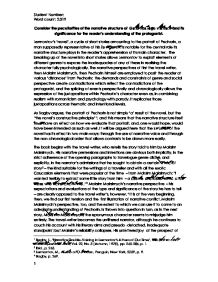 Consider the peculiarities of the narrative structure of Geroi nashego vremeni and its significance for the readers understanding of the protagonist.

Consider the peculiarities of the narrative structure of Geroi nashego vremeni and its significance for the reader's understanding of the protagonist. Lermontov's 'novel', a cycle of short stories amounting to the portrait of Pechorin, a man supposedly representative of his Zeitgeist, is notable for the central role its narrative structure plays in the reader's apprehension of its main character. The breaking up of the novel into short stories allows Lermontov to exploit elements of different genres to expose the inadequacies of any of these in realising the character fully psychologically. The narrative perspectives of first the travel writer, then Maksim Maksimych, then Pechorin himself are employed to posit the reader at various 'distances' from Pechorin; the demands and constraints of genre and social perspective create contradictions which reflect the contradictions of the protagonist, and the splicing of events perspectivally and chronologically allows the expression of the juxtapositions within Pechorin's character even as, in combining realism with romanticism and psychology with parody, it replicates those juxtapositions across thematic and intentional levels. As Bagby argues, the portrait of Pechorin is not simply 'a' result of the novel, but the "the novel's constructive principle"1, and this means that the narrative structure itself must have an effect on how we evaluate that portrait, and, one would hope, would have been intended as such as well. ...read more.

And yet, the situation that precipitated this - his manipulation of Mary, his acceptance of the duel - was entirely of his own making. The Fatalist, subsequently, highlights and ossifies the tension between being subject to fate and tempting it of one's own free will in the form of Vulich, who (in the extreme logical end of Pechorin's decision to give Grushnitsky "every advantage" in their duel in order to "test him"13) challenges predestination by firing a gun at his own head. What does this tension tell us about Pechorin - about Pechorin's generation? He sees his "role" in life as a "calling"14, his personality as entirely the result of the vagaries of life, the actions he takes to stave off his boredom as involuntary, and so on. Perhaps Pechorin is indeed fated to be this person, but only because that is the inevitable result of his own actions. Even though he speaks of being scared to lose his freedom, he has already lost it, since if he cannot take responsibility for his actions and can always shift blame and cause to fate, he cannot conceive of himself as having the freedom to perform them: although he may avoid marriage in order to escape the ...read more.

has given me a fortunate diversion."25 In the widest sense, Pechorin and the novel itself become versions, reflections of each other. Some characters, such as Grushnitsky and Vulich, appear to pinpoint or parody aspects of Pechorin himself26; the themes and genres explored in the novel are explored on the level of the novel as a whole, in the form of its structure and intended status as a portrait of a generation rather than an atypical psychology of one man, but are also replicated on the level of the interaction within the text between narrative voices (Maksim Maksimych and the travel writer), recurring analogous events (the parallel between the duel and Vulich's bet), contrastive events (Pechorin the manipulator becoming Pechorin the manipulated - although chronologically this happens the other way around), and so on. This is all made possible by the specific way in which the narrative structure positions these features in opposition to both each other and the underlying chronology of the novel. In siuzhet's opposition to fabula is realised the opposition of romance to reality; the opposition of the 'hero' to his counterpart world and ultimately, to himself. ...read more.