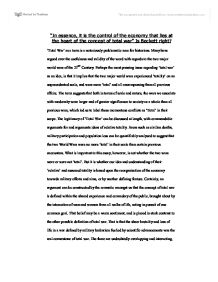 In essence, it is the control of the economy that lies at the heart of the concept of total war Is Beckett right?

"In essence, it is the control of the economy that lies at the heart of the concept of total war" Is Beckett right? 'Total War' as a term is a notoriously problematic area for historians. Many have argued over the usefulness and validity of the word with regards to the two major world wars of the 21ST Century. Perhaps the most pressing issue regarding 'total war' as an idea, is that it implies that the two major world wars experienced 'totality' on an unprecedented scale, and were more 'total' and all-encompassing than all previous affairs. The term suggests that both in terms of scale and nature, the wars we associate with modernity were larger and of greater significance to society as a whole than all previous wars, which led us to label these momentous conflicts as 'Total' in their scope. The legitimacy of 'Total War' can be discussed at length, with commendable arguments for and arguments ideas of relative totality. Areas such as civilian deaths, military participation and population loss can be quantifiably analysed to suggest that the two World Wars were no more 'total' in their scale than certain previous encounters. What is important to this essay, however, is not whether the two wars were or were not 'total'. ...read more.

The total increase in "gainfully occupied persons" during the war years was 2.8 million people, of which 2.2 million were women.3 According to Wright, no other nation did this in such a ruthless and effective manner, which undoubtedly geared society towards victory and gave a feeling of totality towards the war effort. Britain was defined by its reliance on economic warfare, in contrast to Germany who adopted a driven war economy far too late to provide any real stimulus to their campaign. However, 'economic warfare' as utilized by Britain, can be used to describe efforts such as controlling of important enemy ports, blockades on trade towards enemies and the purchasing of materials vital to enemies. This does not provide quite the same 'total war' connotations as the assumptions we place upon economic warfare, which are based around the home front and the idea that everybody pulled together to produce essential materials. It is important to place the economic effort during total war into context. The idea that control of the economy defined total war cannot be explained without referring to the nature of the control. Within Britain, the most effective wartime economy, the conversion towards such autonomy of control was not immediate, and not necessarily enforced. ...read more.

All of the associations central to the idea of total war are consistently overlapping and contrasting, which make it difficult to define what truly makes the two major wars unique in their manner. Certainly with regards to control of the economy and public imagery of the war, it is a delicate relationship between the two, and hard to ascertain which was more important or which came first. Certainly economic control would lead underprivileged groups of societies, such as women and children, into areas of the social stratification they had not seen before. This, it could be argued, was responsible for the collective spirit of the war. On the other hand, visions of the barbarity of the war projected through the media could have aroused public interest, and influenced the government to implement such a strong war time economy. I believe the defining factors of total war all rely upon each other for validation, as the overlapping features of each are undeniable. 1 William S. Culbertson, Total Economic Warfare, Annals of the American Academy of Political and Social Science, Vol.222, Winning Both the War and Peace (Jul 1942) pp8-12, pg 2 2 Wright, Gordon, The Ordeal of Total War, Harper Torchbooks, New York, 1968, pg 44 3 Wright, Total War, pg 51 4 Wright, Total War, pg 48 5 Wright, Total War, pg 49 ?? ?? ?? ?? ...read more.